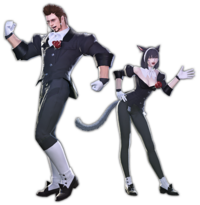 Nashu Mhakaracca is a Miqo'te.

Nashu Mhakaracca is Hildibrand Manderville's faithful assistant. She returned to Eorzea to solve mysteries and continue her master's work in Patch 2.1. Nashu is part of the Side Quests involving Hildibrand.

Nashu was Hildibrand's faithful assistant up until his disappearance five years ago. Today, she carries on in the gentleman hero's stead, offering the people of Eorzea her sleuthing services.

In an effort to unravel the mystery of Dalamud, the esteemed Hildibrand—agent of enquiry, inspector extraordinaire—was thrust to the heavens, never to be seen again. Carrying on the great detective's legacy, Nashu Mhakaracca works tirelessly to unravel the many mysteries which beleaguer Eorzea. With taverns throughout Ul'dah abuzz with talk of unusual zombie activity, her powers of deduction will soon be tested.