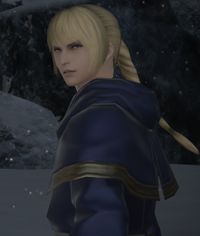 A brilliant graduate of Saint Endalim's Scholasticate, Cyr should have joined the upper echelons of the Holy See by rights. However, he made one small mistake on an important missive, and found himself consigned to the inquisition instead. The Midlander worked long and hard as an assistant, and became a true inquisitor when his superior was invited to join the Heavens' Ward. Now of twenty years, he labors tenaciously to ensure the longevity of his organization.

Cyr is a Hyur found in Foundation.