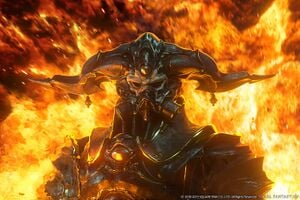 Gaius van Baelsar, the Legatus of the XIVth Legion

He who cannot preserve the sovereignty of his nation is unfit to rule it.

The XIVth Imperial Legion is the youngest legion in of the Garlean Empire's legions, and among the more infamous legions in Final Fantasy XIV due to its prevalence in A Realm Reborn.

It was led by Gaius van Baelsar until his defeat at The Praetorium. All Cohorts present in mainland Eorzea (2.0 zones) are from the XIVth Legion.

Under the command of Gaius van Baelsar, the Legion had several victories during the Empire's advance on cities and nations, and bring them under the Empire's banner. After the Seventh Umbral Calamity, the XIVth Legion built several Castrums all across the nation of Eorzea with the intent of capturing it. However, the Legion met with staunch opposition from the Eorzean Alliance and ultimately failed in its mission.

Under the command of Gaius van Baelsar, the Legion is credited with several victories during the Garlean Empire's advance on Eorzea. Notably, it was responsible for the subjugation and annexation of Ala Mhigo, following the death of King Theodoric in 1557.

In 1562, the XIVth Legion attempted to invade Eorzea via Mor Dhona, using its flagship dreadnaught, the Agrius. The Legion was forced to retreat after the Agrius was destroyed during the Battle of Silvertear Skies. This would lead the XIVth Legion to postpone its campaign against Eorzea, and proceed with construction of Baelsar's Wall on the border of the Black Shroud and Gyr Abania.

In 1569, a dreadnaught of the XIVth Legion would open fire and shoot down a Highwind Skyways airship transporting civilian passengers, resulting in the temporary suspension of airship travel for regular Eorzean citizens.

In 1572, Project Meteor would resume under the command of Legatus Nael van Darnus. The XIVth Legion was then instructed to help see this plan through, resulting in the Battle of Carteneau and the Seventh Umbral Calamity.

Following the discovery of the Ultima Weapon, Gaius van Baelsar, receiving hidden guidance from the Ascian, Lahabrea, subjugated the Primals of the Beast Tribes, and offered an ultimatum to the leaders of Eorzea: Surrender or fall.

In response, the Eorzean Alliance launched an all-out offensive against the Legion, infiltrating Castrum Meridianum and destroying the Ultima Weapon before it could be utilized fully. Legatus Gaius van Baelsar vanished from what remained of the Castrum after his defeat by the Warrior of Light, and presumed dead by many.