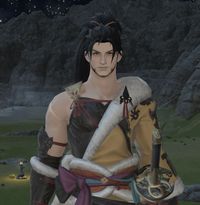 Stone walls do not a nation make. Her people do. And as long as we yet live, we can rebuild "So. My blade or my head. Which would you have of me?"

Born to his mother Mina shortly after Doma fell to Garlemald, Hien knew nothing of life before the occupation. Though he was subjected to the official imperial curriculum, he was also permitted to study Doman arts and culture, and from this diverse education, he developed an appreciation for both traditional values and modern philosophies. Until his mother passed away following an illness some fifteen years ago, little "Shun" enjoyed a relatively happy life with his father's retainer, Gosetsu. Following her death, he devoted himself to the pursuit of Doma's liberation and reconstruction. That said, the young lord still finds time to sup on raw meat and enjoy spirits with his comrades, who never fail to enjoy his good company.

The young heir to the throne of Doma, Hien is a charismatic leader beloved of his people. Together with Gosetsu and Yugiri, he spurred his countrymen to rise up against their Garlean oppressors. But when the rebellion was crushed, Lord Hien vanished without a trace...


Do Not Sell My Personal Information
Retrieved from "https://ffxiv.consolegameswiki.com/mediawiki/index.php?title=Hien&oldid=257580"
Categories: