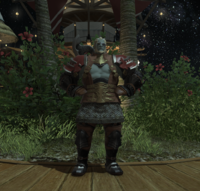 "The world has ever been full of brave souls eager to give their lives for a righteous cause, but all too few capable of making a difference with their sacrifice."

A former captain of the Company of Heroes, Wheiskaet counts defeating Titan and Leviathan amongst the many achievements of his forty-six years. Though a grievous battle wound would hasten his retirement from the sellsword life, his ability to wield a blade has not dimmed in the days since. When his company was disbanded, the Sea Wolf took on a new contract, and now he and his remaining men serve as guards to Gegeruju, a wealthy merchant who owns the beaches of Bloodshore.

Wheiskaet is a Roegadyn found in Eastern La Noscea.

When the Kobold sought to summon their Primal, Titan and attack the people of Limsa Lominsa, Merlwyb turned to the Scions of the Seventh Dawn and the Warrior of Light to stop the summoning from happening. She advised they speak to the former members of the Company of Heroes, who had faced and defeated Titan before. Y'shtola and the Warrior of Light met with Wheiskaet in Costa del Sol. He did not initially believe that they had what it took to face off against Titan, and sought to have them prove themselves to him and the other members of the Company. He had the Warrior of Light gather the various components to a large banquet, under the guise that Gegeruju would be entertaining foreign dignitaries. In truth, each task assigned to them was part of a test to learn whether or not they were ready to take on Titan. When they suceeded, Wheiskaet revealed that the banquet was in fact for them to celebrate them passing the test.

When Landaniel, a former member of the Company of Heroes came to Wheiskaet asking for help to search for their former commander, Lorens, he agreed to help. However, Landaniel received an anonomous letter some time after their search began, stating that Lorens had died. Designating Wheiskaet as the organizer of the funeral, Landaniel came to him searching for answers. However, Wheiskaet said that he had received no such letter, nor had he heard anything about the captain's death. Landaniel then announced his plan to divert all his efforts and attention to seeking out their former leader, Wheiskaet realized that the one who had sent the letter was Lorens himself, and that he had hoped that by faking his death, Landaniel would seek out his own path, as he had wished when he originally dissolved the Company of Heroes. Upon this realization, he informed Landaniel that he would no longer be able to help him pursue Lorens, and he must find his own way.

When Curious Gorge and Broken Mountain had retreated to Camp Bronze Lake to recover after both losing control of their Inner Beasts, Wheiskaet encouraged Broken Mountain to leave behind what he had done and focus his efforts on mastering the techniques of old to gain permanent control over the Inner Beast. He encourages them to pursue the Mythril Heart, enlisting the Warrior of Light to aid them.

After they both spend time mastering their techniques, Wheiskaet hires the pair of brothers and the Warrior of Light to aid in various missions for the Maelstrom. He joined in with the group in a battle against the Sahagin in Skull Valley, not letting his old wounds hold him back anymore. After witnessing their deeds, Eynzahr, the commander of the Maelstrom, asks the brothers to train the members of the Grand Company in the ways of the Warrior.

Some time later, during the Final Days, Merlwyb reunited the Company of Heroes once again to deal with the threat of the Blasphemies, as well as stopping the Crushing Tide, the Tempered Sahagin from summoning Leviathan again. With Lorens absent as their commander, the Warrior of Light is appointed their new leader. At first, Wheiskaet was unsure of this idea, but after hearing their battle plan, followed their orders and accepted them as the new leader.

After routing the Crushing Tide, Wheiskaet and the Company of Heroes tracked Doww, a Blasphemy that had spawned from the despair of the Indigo Matriarch of the Sahagin. The company is saved by Lorens, who attacked from a concealed location. Realizing they would need his strength, the Warrior of Light conviced him to rejoin their ranks. Meanwhile, Wheiskaet tracked the Blasphemy to Sastasha. He and the others joined in the battle against the beast after the Warrior of Light, Merlwyb and Lorens set off for it. After the battle, the Company of Heroes was reunited with one another once again.