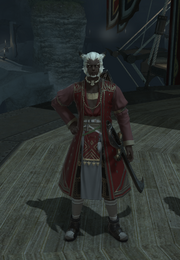 U'odh Nunh is a Miqo'te found in Southern Thanalan.

A former member of the Company of Heroes, U'odh made a name for himself as a mercenary before being brought into the Company. He, alongside his fellow Heroes, handled the Primal threat in Vylbrand. After the Company was disbanded, U'odh was chosen as one of those who would judge any tha would uphold their mission in the future, and pass on their knowledge. He went on to defeat the nunh of the U Tribe and become its leader.

When the Kobolds summoned Titan again, the Scions of the Seventh Dawn and the Warrior of Light sought out the former members of the Company of Heroes to learn what they could about Titan and how they went about defeating him. To judge their character, Wheiskaet sent the Warrior of Light to U'odh to assist in gathering ingredients for an important feast. U'odh charges them with hunting a Wellwick Worm for their meat. With the hunt completed, he sends the Warrior of Light back to Costa del Sol with a bottle of brandewine for Wheiskaet, indicating he approved of the Warrior and the Scions. U'odh would later join the banquet, which it turned out was in honor of the Warrior of Light before heading into battle. He, along with the other Heroes, pass on their knowledge to the Scions so they may defeat Titan.

Later, when the Final Days were upon Eorzea, U'odh and the Company of Heroesaided in both hunting the Blasphemies that ran amok as well as preventing the Sahagin from summoning Leviathan again. U'odh held off the Crushing Tide when they attacked Candlekeep Quay while the Warrior of Light and Merlwyb hunted the Blasphemy in Sastasha.