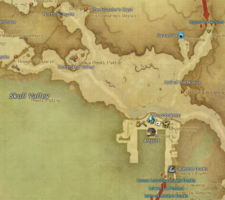 The name of this valley bespeaks a grisly history. When kobolds ventured down from O'Ghomoro, they were slaughtered by Yellowjackets, and their skulls placed on display as a warning to others. With the changing times, the place is now more likely to face Sahagin incursion.

Skull Valley is a area in Western La Noscea.

Hall of the Novice

A training facility for new adventurers. Players are able to complete a series of level 15 quests here, or from any of the Hall's representatives, to obtain leveling gear and practice skills used during group activities.

Ages of pounding waves have worn away the sea cliff, leaving this natural cavern. While tales that the Seagrot is the lair of deadly coeurls abound, it has become clear that this was a ploy by the Serpent Reavers to keep people away. The cavern connects with the sea, and these pirates have built a hideout at its depths whence they aid the Sahagin.

The Founder's Crypt stands to commemorate a settler named Aerghaemr - a hero who died so that many more could live. He alone stayed behind when the Sahagin attacked to buy his comrades precious time to flee.

Taking advantage of the chaos left in the Calamity's wake, a large force of Sahagin rose from the seas and laid claim to Halfstone, a distant Lominsan settlement on the far - western edge of La Noscea. To prevent any further swells of the beastman forces, a massive wall was erected between the enemy-occupied lowlands and the allied Skull Valley.

Now a strategic outpost for the Maelstrom, Camp Skull Valley was once but a circle of tents occupied by a meager Yellowjacket unit charged with surveilling the area for kobold incursions. Those beastmen foolish enough to venture down from O'Ghomoro were slaughtered and beheaded - their skulls put on display as a warning to others.