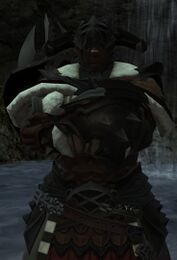 "That should send 'em scuttling back to their nests. You can call me Curious Gorge─one remark about the name and I'll rip yer ugly heads from your shoulders and suck the marrow out of your twitching spines. You two are guards from Costa del Sol, I reckon?"

Curious Gorge is a Roegadyn found in Eastern La Noscea.

Born in Abalathia's Spine to the descendants of warriors, Curious Gorge is a young Hellsguard who seeks to restore the glory of his ancestors. Along with his brother, Broken Mountain, he strives to unlock the secrets of ancient techniques and master the all-but-forgotten art of the Warrior. Some years after his elder sibling had departed their homeland to share their martial knowledge with the rest of Eorzea, Curious Gorge tired of merely training, and left the mountains to put his skills into practice. He joined the acclaimed Company of Heroes, where his fledgling talents soon reached their full potential. Though the company disbanded following the Seventh Umbral Calamity, Curious Gorge continued his mercenary career, taking every opportunity to reintroduce to the world the brutal majesty of the Warrior's way.

Curious Gorge followed rumors of his brother losing control of his Inner Beast and rampaging across Eorzea, hoping to find him and help him regain control. He meets with the Warrior of Light on the beaches of Costa Del Sol, where they were driving back aggressive monsters that had come into contact with his brother's deadly aura. Impressed by their prowess with an axe, Curious Gorge takes them under his tutelage, promising to teach him the lost art of the Warrior.

As part of his training regime, Curious Gorge sends the Warrior of Light across the lands searching for the ancient Fighter's armor, which grants the wearer immeasurable power, while also training them in the various arts of war. However, as their training continued, Curious Gorge began to grow more and more fearful of the Warrior of Light's Inner Beast, and that they may succumb to the same rage that his brother had. He therefore refuses to train them any further until he has concrete proof that the power of the armor will not overwhelm an outsider to his people.

When the pair investigate rumors of a "bloodthirsty monster" attacking Wineport, they come to learn that the "monster" is none other than Broken Mountain, Curious Gorge's brother. The pair engage him in a fierce duel, eventually managing to subdue him. However, in the heat of battle, Curious Gorge loses control over his own Inner Beast and begins to rampage as well. In his last moments of lucidity, he asks the Warrior of Light to defeat him, as the only means of quelling the rage within.

Following the battle, Curious Gorge regained control of himself again, and reflected on what led him and his brother to that position, while also recognizing the Warrior of Light for their mastery of their own Inner Beast. He swears that he will continue to work hard to restore his people's legacy to its former glory, him and his brother both.

After some time, Curious Gorge is challenged by Wyrnzoen and his Marauders in the hopes of seeing if the rumors are true. During the battle, a Marauder named Dorgono fell prey to her Inner Beast and began rampaging, tossing the other combatants over the side of the railing and into the water. Curious Gorge, seemingly smitten with her raw power, was also sent flying. The Warrior of Light and Broken Mountain managed to quell her, after which she revealed her name and that she was from the Azim Steppe. She was originally part of the Qerel tribe, but was exiled for being Taken, a warrior who has lost themselves to the "Will of Karash", simply another name for the Inner Beast. Upon learning that the Inner Beast could be tamed, she joined with Broken Mountain and the Warrior of Light to begin her training. Meanwhile, displeased with his loss, Curious Gorge left on his own to train harder.

Some time later, Curious Gorge crossed paths with Dorgono, Broken Mountain and the Warrior of Light, and commented that he didn't believe that Dorgono had in fact mastered her Inner Beast, saying that she was hesitating with every attack. Though the two bickered and Curious Gorge stormed off to continue his training, Broken Mountain agreed that she required more training.

Curious Gorge joined the group on a mission to stop the Mamool Ja from attacking Wineport. Though he and Dorgono bickered, they eventually came up against several Mamool Ja. Curious Gorge found himself lacking strength and was unable to call upon his Inner Beast, just as Dorgono looked to be losing herself to hers. Luckily, she managed to control herself before she attacked Curious Gorge. Unable to face his comrades in his weakened state, he fled.

Curious Gorge joined with Dorgono and the Warrior of Light on the Azim Steppe, where he confessed to the Warrior of Light that he had fallen for Dorgono and it was what was keeping his Inner Beast dormant. He had no idea what to do, but felt the overwhelming need to seek her out. When Dorgono is blamed for the attack on the Qerel, the group set out to find the Chaghan, a clan made up of other Taken who believe that the Inner Beast and the resulting rage are a boon from the Dusk Mother, and are known to commit heinous acts while under the rage of the Inner Beast.

Before engaging the Chaghan, Curious Gorge confessed his love for Dorgono. However, due to the volume of his profession, the Chaghan had been alerted to their presence and engaged them in battle. After the brutal struggle, Curious Gorge once again succumbed to his Inner Beast. Seeing him in a pure rage opened Dorgono's eyes to her true feelings, and she confessed her returned love to Curious Gorge, knocking him out of his rage. Though they had both fallen for one another, Curious Gorge could not start his life with Dorgono, fearing that he may inadvertently lose control and hurt her, or worse. Swearing to return to her only after he had fully mastered his Inner Beast, he bid her farewell, with her promising to wait for him.

Some time later, Curious Gorge searches for a way to heal a mysterious ailment silencing his brothers Inner Beast. He meets with the Warrior of Light and shares that he feels worried that Dorgono had moved on, as she had not returned a single letter he had written. He leaves for the Azim Steppe to find an answer, and hopefully a cure for his brother. When he realizes that Dorgono had come to Eorzea to meet with him, he returned, meeting Dorgono's father, Luvsan, who had cured his brother of his ailment. However, he sees the Warrior of Light and Dorgono exchange pleasantries, and mistakes the interaction as something more. Loosing his grip on his Inner Beast, he charges, but is immediately stopped by Dorgono who tells him he is foolish, and loves only him. Her father returns to the Azim Steppe, and bids Curious Gorge take care of and train his daughter, recognizing that the two are in love.