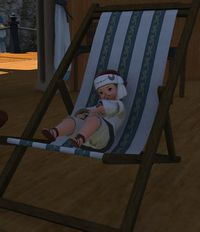 Gegeruju is a Lalafell found in Eastern La Noscea.

A member of the Dunesfolk, the only thing more mysterious than this Lalafell plutocrat is how he obtained his money. Being fabulously wealthy, Gegeruju is more than happy to spend his days lounging on the beaches of Costa del Sol with his network of maids and servants who wait on... almost his every whim or playing a good round of Triple Triad. Not one to shy away from opening his coffers to any who are in need, his aid doesn't come free, as he will more likely than not put those who come to him for aid to work first, earning his favor.