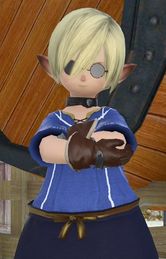 Shamani Lohmani is a Lalafell found in Eastern La Noscea.

Following the conquering of Ala Mhigo by the Garlean Empire, Shamani made his way to Eorzea, where he lived and worked as a refugee. His fortunes turned around when he was eventually hired to work at the Platinum Mirage for Teledji Adeledji. When Titan and the other Primals began appearing and ravaging the land, he joined the Company of Heroes, fighting alongside them to extinguish the Primal threat.

In the events of the Seventh Umbral Calamity, he was blinded in the destruction wrought by Bahamut. Unable to fight, he eventually wandered to Wineport, where he became a vinter. His other senses grew sharper, to the point where his nose can differentiate between various subtle notes and ingredients in things such as wine or perfume, and can tell an adventurer apart from the average citizen.