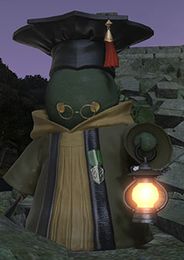 Surito Carito is a Spoken found in Camp Bronze Lake.

A scholar of the Nymian Royal Marines, Surito Carito devoted himself to concocting a cure for an eldritch plague that gradually transformed the afflicted into hideous, stunted monsters. The blight had found its way into Nym on the decks of a trading vessel near the end of the Fifth Astral Era, and Surito himself eventually succumbed to the contagion before his budding treatment could be perfected. But his misfortune, ad that of the other victims, was not to end there. The people were so terrified of the disease that they began calling its sufferers Tonberries, equating their existence with the fearful creatures of myth, and the entire temple into which the malformed Nymians had been herded was sunk into a nearby lake. Submerged under water and bound behind powerful warding magicks, Surito would slumber for more than fifteen centuries before the arcane seals upon the temple were sundered by the advent of the Seventh Umbral Calamity.

Surito would later call upon Alka and the Warrior of Light again when the Green Death began spreading once more. With their help he sets up new wards to prevent further spread, and begins working on a cure. He recounts how the disease first spread, prompting Alka to suggest looking for the ampoule gifted to the sailors back then. Upon retrieving it, Surito realized that the disease had been caused by the people of Mhach when he finds one of their binding sigils on it, suggesting that the Voidsent that had caused the virus was still alive and active. He sends the pair off to handle the voidsent to completely stop the spread of the virus and prevent more people from being infected.

While researching how to track the voidsent, he has his fellow Royal Marine train them in Nymian military tactics. Surito later discovered that the Faerie should be able to track where the voidsent had gorged on large amounts of Aether. With the Voidsent located, the Warrior of Light and Alka quickly dispatched it. With its body brought back to camp, Surito began studying it to help find a cure.

Some time later, Surito called upon Alka and the Warrior of Light once again to help search for his missing protege, Setoto Seto, who had suddenly vanished one day. When they locate her, she explained that she was searching to find any remnant of her father's belongings. The pair help her, and they eventually find her father's tome, robes and Soul Crystal, which houses his faeire, Lilac. However, upon calling upon the Faerie, Setoto is rendered comatose, her aether syphoned to the faerie who took off from the Amdapor Keep. Surito suggested that if they could defeat the faerie, they may yet be able to retrieve Setoto's aether and wake her up.

After the pair hunt down the Faerie and defeat it in the body of the Kuribu at The Lost City of Amdapor, the Warrior of Light brings Surito a large crystal, which he identifies as a crystal of pure White Magic. He surmises that Lilac took Setoto's aether to lead them there, so they may find what they needed to cure the Green Death, as was her father's desire.

Eventually, Surito has developed a potential cure using the knowledge that the Warrior of Light gained on The First regarding Lamitt and the Stoneblight. Setoto volunteers as the test subject, and with the assistance of Alka and the Warrior of Light, she is returned to her Lalafellin form, completely cured. Though he says it will take some time and testing to make sure the cure holds, Surito was confident this breakthrough could eventually lead to the curing of himself and all his people.