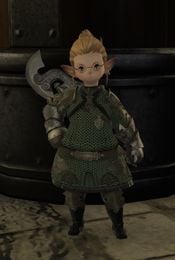 Born to parents employed by the Mealvan's Gate customs house, Alka Zolka grwe into a youth with a refined appreciation for reading. Surrounded by the unlettered children of fishermen and sailors however, his love for books was often mocked as the pointless pastime of a weakling landlubber. Fueled by indignation and determined to prove that strategy trumps brute force, Alka presented himself as an aspirant to the Marauder's Guild upon his sixteenth nameday. Though his peers within the guild held his intellectual pursuits in equally low regard, he weathered their jeering insults with unyielding stoicism. Alka had learned of the military tactics of Nym from an ancient tablet, and knew that if he could but recreate their wisdom, he would wield a weapon greater than any reaver's axe.

Alka reached out to the Arcanist's Guild in the hopes that he would be able to recreate the military formation used by the Nym to learn what he could about its strategic prowess. Joined by the Warrior of Light, he put the strategy to the test against a group of bandits. Upon defeating them, he discovered a Soul Crystal, which he gave to the Warrior of Light. The Soul Crystal resonated with them, blessing them with a faerie of their own. Alka asked the Warrior of Light to continue training and learn to work with the faerie.

Sometime later, Alka Zolka reached out to the Warrior of Light, telling them the Green Death had begun to spread again, and he needed help creating a ward to quarantine the infected, then work on a cure. Surito explained how the virus had appeared in Nym after some sailors had returned from a strange island with an ampoule.

Alka helped recover the ampoule, on which Surito discovered a binding sigil used by the Mhachi people. realizing that they must have given it to the sailors and attached a Voidsent to it, he concluded that the voidsent may still be alive and hidden somewhere. Alka Zolka and the Warrior of Light work together with Surito to determine how they can track it down.

Eventually it is revealed that the Voidsent could be tracked by the faerie, Lily. the Warrior of Light and Alka track the voidsent named Bitoso to Camp Bronze Lake and slay it, stopping it from continuing to feed of the Aether of soldiers. Stopping the source of the plague, they begin working on a cure.

While Surito was working on the cure, he called upon Alka and the Warrior of Light to help find his protege, Setoto Seto. When they tracked her down, she revealed that she was looking for her father's belongings. Alka assisted her in locating her father's things in Amdapor Keep, uncovering his Grimoire, robes, and his Soul Crystal. When Setoto attempted to call upon her father's faerie, Lilac, she collapsed, her aether taken by a dark orb that emerged from the stone, which took off away from the Keep.

Bringing Setoto back to camp, Alka, the Warrior of Light and a Wood Wailer named Landenel set off tracking the faerie, eventually discovering it at The Lost City of Amdapor. Eventually tracking the faerie to the fallen Kuribu, merging with it. Upon defeating it, a large red gem fell from its chest. With the faerie defeated, Setoto's aether was returned to her.

Taking the stone to Surito, he revealed that it was a crystal of concentrated White Magic. After Alka explained what had transpired, he posited that Lilac must have held the aether and desires of Setoto's father, wanting her to recover. Setoto took the crystal and began studying it so that he may craft a cure for the Green Death.

After much time and studying, Alka and Surito finally developed a cure. After reaching out to the Warrior of Light, they came together to use the crystal to return Setoto to her original Lalafell form. In a fit of excitement following her recovery from the Green Death, Alka rushed off, desiring to train harder.