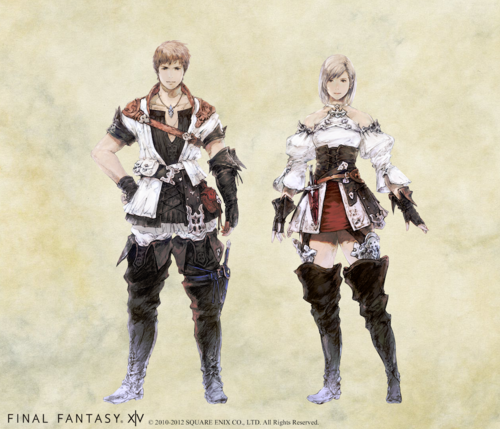 The Hyur are the most populous race in Eorzea.

Over the course of three great migratory waves, the Hyur (ヒューラン, "Hyūran") have become the most populous of Eorzea's races, and make up a prominent portion of the population of each of the realm's city-states.[1] Possessed of an average physique in height and build compared to the other races, they champion personal freedom and liberty, with an eclectic variety of languages and traditions stemming from their diverse backgrounds.[2] The Hyur are known for their peculiarly short, rounded ears and are well-suited for traveling long distances by foot—a trait thought to account for their swift proliferation.[3]

On the First, the Hyur are instead called the Hume. Humes appear to have similarly spread across Norvrandt. They are present in the Crystarium, Eulmore, the Rak'tika Greatwood, and Amh Araeng. Prior to the flood of Light, Lakeland and Nabaath Areng were known for their Hume populations, and a number of Hume are said to have lived beyond Norvrandt, Ran'jit being the only known survivor of one of these clans.

When the Hyur first arrived in Eorzea before the First Astral Era, they were just one race among many.[1] They remained no more populous than the other races for millennia, with Hyuran citizens appearing in many of Eorzea's societies such as ancient Allag, Mhach, and Amdapor. Around the year 350 of the Sixth Astral Era, Hyuran tribes began to emigrate en masse into Eorzea in the first of three great migratory wave, followed by an additional two waves close to the years 660 and 750.[4]

The Hyur spread from the northeastern reaches of Ilsabard and other continents and islands to all corners of the realm, forever changing the racial demographic of Eorzea and solidifying their status as the most populous race in the modern day.[1] As they came to settle in Eorzea, they displaced the Elezen inhabitants of the land, some finding themselves in conflict and outright war with those Elezen who chose to settle the Black Shroud and the Lalafellin citizens of Belah'dia. Ultimately, the former were able to settle their differences, forming the Pact of Gelmorra and co-founding the eponymous city-state.

The Highlander Hyur of Gyr Abania spent the early years of the Sixth Astral Era warring amongst themselves until Anshelm Cotter founded the city-state of Ala Mhigo and united their clans. For a time, Ala Mhigo would serve as the predominant Hyuran nation in Eorzea, with Gelmorra as a secondary bastion for the Hyur, but as the races integrated, Hyur came to live in each city-state.

The Hyur of Limsa Lominsa primarily descend from Hyuran sailors forced to serve aboard Lominsan pirate ships. They also dwelled in Belah'dia near the end of its lifespan, and formed part of the populations of its successor city-states: Ul'dah, where Hyur of both clans continue to dwell to this day, and fallen Sil'dih. In fact, a Hyuran man named Baldurf Thorne came into power as sultan of Ul'dah following the War of the Sisters, beginning the lost Thorne Dynasty.[5]

In 1076, a Hyuran mage named Jorin Lightheart created conjury to commune with the elementals, securing safe dwelling in the forest for the Gelmorrans.[6] When Gelmorra was abandoned, the Hyur formed a sizable portion of Gridania's native population, and both Ishgard and Sharlayan include Hyuran citizenry. In 1322 of the Sixth Astral Era, the Creeping Death struck the Hyuran population of Gridania, taking many Hyuran residents of the city-state before a cure was found five years later.[7]

Around the 930th year of the Sixth Astral Era, the fledgling Republic of Garlemald suffered a crippling blow when it was raided by Hyuran nomads from northern Ilsabard. The Republic hired Roegadyn mountain clans to fight them back, successfully driving off the Hyur.[8] Hyur dwell in the capital of Garlemald and its surrounding areas even today. 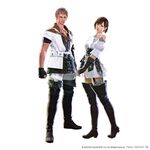 Midlanders are average of build and height. 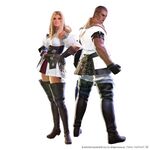 Highlanders are taller and more muscular.

The Hyur of Eorzea are divided into two clans: the Midlanders of the realm's low-lying regions, and the Highlanders who call the mountains home. [1] The Midlanders largely arrived in the three great migratory waves, or else came for trade or were pressed into service by pirates. The Highlanders were the first Hyur to settle Eorzea in the Sixth Astral Era and descend from refugees of the Sixth Umbral Calamity who followed a comet to the highlands of Gyr Abania, eventually founding the city-state of Ala Mhigo.

Outside of Eorzea, there exist distinct clans of Hyur in the other two of the Three Great Continents, Ilsabard and Othard, as well as Hyur who dwell in the far southern continent of Meracydia[9] and the western continent, the New World.[1] Some Hyur also call the islands of the Bounty, such as Thavnair, home, and some dwell in Sharlayan in the Northern Empty. Their manifold clans and houses are as abundant as the stars in the night sky.

As the Hyur possess many languages and cultural backgrounds from their places of origin, any sense of universal cultural identity among Hyur is tenuous at best. Hyur tend to value personal freedom, distinguishing themselves in a wide array of disciplines and industries without regard for tradition or heredity. While this can make other races view them as overzealous and unprincipled, none can deny the knowledge, technology, and new ideas the Hyur have brought with them have served as the driving force behind the rapid spread of culture and civilization in Eorzea.[1]

The simple yet functional attire worn by Hyuran adventurers is made of cotton fabrics reinforced with leather. Hyur tend to favor leather longboots, which some claim is a vestigial habit from their ancestors who crossed the snow-swept plains of Ilsabard.[1]

The common tongue of the Hyur is spoken in all nations of Eorzea, as well as in almost every nation across the world due to frequent migration and cultural exchange by the Hyur.[1] The language is spoken almost anywhere Hyur can be found, and as Hyur can be found almost anywhere, it is rare to find a major city that doesn't use it. The twenty-six letter Eorzean Alphabet is based on the Hyuran tongue, developed by Hyuran priests in the Fourth Astral Era and still in use to this day. The language also contains pieces of other racial languages, particularly the tongue of the Elezen.