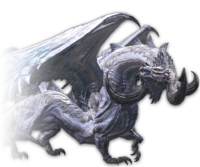 Hark thee, mortal, to the naked truth...then tell me thou deservest forgiveness!

Hraesvelgr is a boss found in Sohr Khai. 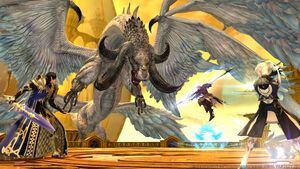 Another of the first brood, Hraesvelgr claims command over ice and holy light. Twelve centuries past, the great wyrm fell in love with a mortal woman by the name of Shiva. Yet it was this very mortality which would soon bring him much sorrow. Hraesvelgr began to despair that death would one day separate them. Shiva, sensing her beloved's wish that they never be parted, bid him devour her so that their souls might be forever entwined. Her sacrifice deepened the understanding betwixt man and dragon, and ultimately led unto a rare age of peace.