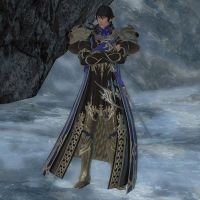 "We must right the wrongs of antiquity and move forward as a nation united."

Ser Aymeric de Borel is the lord commander of the Temple Knights. He was adopted at birth by an aged viscount of House Borel, whose wife was barren. Though they treated him as their own flesh and blood, rumors of his status as a bastard and his father's true identity eventually found their way to him. And so, after being inducted into the Temple Knights, Ser Aymeric hoped he might one day be granted an audience with the archbishop to learn the whole truth.The thirty-two year old Ser Aymeric's political views, as well as his distaste for petty power struggles, are largely a result of his upbringing, particularly his keen awareness of the limitations placed upon an individual for the circumstances of their birth. The lord commander is a remarkably modest man, and shirks the fine cuisines of the capital, instead choosing to break the same bread as any common soldier. The one pleasure in which he indulges is a dash of rich birch syrup in his morning tea, ever so subtly.However, Ser Aymeric is more than capable of conducting himself with dignity and aplomb when attending the many galas held by Ishgard's elite—participation in which is necessary for any who would gain and wield political influence. Accordingly, he has developed a reputation as a fashionable nobleman and a skilled dancer, and is often the subject of conversations between highborn ladies. Naegling: Ser Aymeric's sword, Naegling, is a Borel family heirloom once used to slay dragons. Ser Aymeric's foster father prayed it would grant him strength in the struggles to come, both on and off the battlefield.

Aymeric is an Elezen found in Coerthas Central Highlands.