I am neither a saint nor a savior - just another sinner. Yet I will not forsake this cause. I cannot. I will see this cycle broken and peace restored. 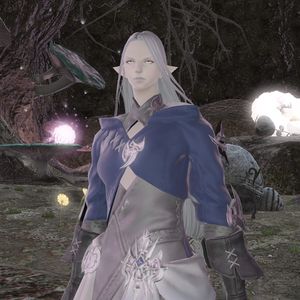 Ysayle was a Duskwight[1] Elezen who once made her home in Falcon's Nest. From a young age, she had manifested the Echo, and was terrified by her visions. She would see images of a beautiful Elezen woman and a large white Dragon. When the Seventh Umbral Calamity caused massive changes in the environment of her home and brought an eternal snowstorm, her and her people sought refuge in Ishgard proper. Unfortunately, her entire village and everyone she knew was buried beneath a massive avalanche. Wandering aimlessly, she ended up crossing paths with Hraesvelgr and through the Echo, learned the truth of the origins of the Dragonsong War. She eventually went to live in Tailfeather to be nearer to the Dragons.

In her adulthood, she finally denounced the ways of the Holy See and their crusade, resolving to bring an end to the war, so no child would die cold and alone in the snow. She took up the moniker of Lady Iceheart and began bringing together others who turned their backs on the church of Ishgard and worshiped Saint Shiva. They begin gathering crystals so she may summon Shiva in the hopes of ending the war.

By stealing crystals, she comes into contact with the Scions of the Seventh Dawn and the Warrior of Light. They, along with the Temple Knights, track her to the Akh Afah Amphitheatre, where she uses her Echo and the crystals to invoke the Primal Shiva within herself. After an intense battle, she is defeated by the Warrior of Light, but manages to escape after taunting them, saying they do not know who they fight for. She later reappears at the Gates of Judgement, where she leads the Dragons in an attack against The Steps of Faith after destroying Daniffen's Collar, the ward preventing the Dragons from truly launching an assault on Ishgard. The Warrior of Light managed to stop Vishap, but the damage was done to the city-state. In a rage, Estinien Wyrmblood swore to hunt her down and make her pay for the lives lost with her own.

The Warrior of Light and Ysayle cross paths once again in an abandoned home in the Coerthas Western Highlands, where Midgardsormr tells her that their goals aligned, but their methodology differed. She expresses regret for those who died at the Steps of Faith, and explained to the Warrior the true genesis instant to the Dragonsong War.

Later, when she is drawn out by Alphinaud Leveilleur, the Warrior of Light and Estinien, they explain to her their plan to entreat with the Dragons to end the war without further casualties, and that they need her to take them to Hraesvelgr. Knowing that the Dragon is unlikely to listen to them, she nevertheless takes them to the Churning Mists.

Before they can ascend to Hraesvelgr's lair, they must stop the Gnath god, Ravana, who is attacking the Dragons in the area. Ysayle attempts to defeat the Primal with the power of Shiva, but falters, due to not having enough crystal power. After the Warrior of Light lays the god low, they are allowed to pass into Sohm Al. The party is waylaid by Tioman, the broodmate to Nidhogg, who they must slay in order to proceed.

They meet with Hraesvelgr, only to have them confirm what Ysayle said: he would not help them. He also told her that the Shiva she worshiped was nothing like his love, and was but a mockery of who she was. This causes Ysayle to lose faith in herself and her mission, and leaves the group.

Much later, after Nidhogg is slain, she condemns Hraesvelgr for giving Nidhogg one of his eyes so he may seek vengeance against the Ishgardians. He tells her that Nidhogg was not the only one who sought vengeance, and that seeing Ratatoskr dead broke his heart too. He tells Ysayle and the rest of the party to leave, while he was still capable of showing them mercy. Back in Ishgard, when a band of heretics attacks the city, she has them stand down, as the war they fought to end was now over. They are allowed to leave thanks to the intervention of Estinien and Haurchefant. Despite the war being over and her mission completed, Ysayle still felt conflicted, and left to ponder why.

When the Warrior of Light and the Scions, along with the Garlond Ironworks track Thordan VII to Azys Lla and attempt to breach the Allagan barrier surrounding the floating city, they are waylaid by the Garlean Empire. During the battle, Ysayle arrives, riding on the back of Hraesvelgr. With her mind clear, she intends to atone for the bloodshed she had caused in the name of her mission. She transforms once again into Shiva and fights alongside the Dragon. disabling a massive Agrius-class Airship, the Gration, but was unfortunately shot out of the sky. With the last of her strength, she protects Cid Garlond's airship so they can flee, and is blown away by cannonfire. She fell from the sky and perished, releasing a mass of beautiful blue Aether.

At the final battle against Nidhogg's shade, who had possessed Estinien when he claimed both of Nidhogg's Eyes, the Warrior of Light was guided by an apparition in the form of Ysayle. When the Eyes were removed from Estinien's armor, she smiled and finally faded away, knowing her people and the Dragons were finally on the path to reuniting.