Azeyma is keeper of the sun and goddess of inquiry. She commands the element of fire and is associated with the ninth moon of the Eorzean calendar.

Azeyma is the daughter of Althyk, and the elder sister of Menphina. She is most often depicted as a noble lady holding a golden fan. Her symbol is the radiant sun.

According to the Faith of The Twelve, Azeyma's sun was the source of heat that fired the golden bricks that Nald'thal used to build the sprawling city of the Heaven of Fire, the resting place for the just and fair, the honest and the philanthropic. The rubble from this city was cast into the Pit and set alight, burning those condemned to the Hell of Fire for judging others wrongly, tricked their customers, or those who gave and received douceurs.

The Seekers of the Sun tribe of the Miqo'te worship Azeyma for her light and warmth, and the fallen sultanate of Belah'dia once worshiped her as well.

The Mark of Azeyma can be found at Final Prayer, near the Burning Wall in Eastern Thanalan.

The Sunken Temple of Qarn was once a temple devoted to Azeyma, believed to have been constructed during the reign of Tatamefu II of Belah'dia. Architecture from the ruins of Belah'dia across Thanalan bear the Warden's mark, reflecting this.[1][2]

A mercenary remembered for her selfless tenacity, in the tale of Saint Norvello's Quarry.[3]

A judge who would not be swayed by bribes, and was revered for the equity he restored, remembered in the tale of Saint Anselmet's Decree.[4]

Myths of the Realm

Following the events of Endwalker, reports begin to surface about adventurers encountering Azeyma in present-day Eorzea.

Main article: Myths of the Realm 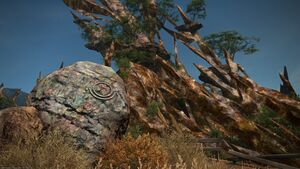 The Mark of Azeyma can be found at Final Prayer, near the Burning Wall in Eastern Thanalan.