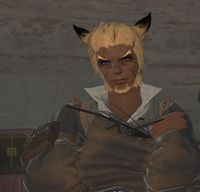 The fires of war spread across Gyr Abania, and soon we ourselves may be forced to enter the fray. Should it come to pass, then it will fall to me to guide my people through the flames, for I have the rare and unfortunate honor to serve not only as nunh, but as leader of my people.

M'rahz Nunh is a Miqo'te found in The Fringes.

M'rahz was only three and twenty when he bested his predecessor in a duel and replaced him as nunh, a breeding male. While that was an impressive feat in its own right, the Seeker of the Sun would be the first to acknowledge that the harder part was still to come. In the early days, it seemed as though he could please none of the womenfolk, but pain proved an effective teacher and he quickly honed his sensitivity to the needs of others.

Over the next twenty seven years, he has protected his people as both a husband and a father. A challenging task at the best of times, it was only made more difficult when the Garlean Empire invaded two decades ago. With their hunting grounds shrinking and food growing scarcer by the season, many hard decisions had to be made. And the hardest one of all was that which saw his dear friend and fellow nunh, M'aht, leave the village behind. Owing to their history, he harbors a fondness for M'zhet Tia, Mah't's spirited son.

When M'zhet began regularly challenging him to combat for his title, M'rahz sent the Warrior of Light to train him, at the time not knowing who he was, but finding him intriguing. When he returned again, M'rahz defeated him handily once again and asked him for his motivations. M'zhet revealed who he was, and blamed M'rahz for his father leaving the village and abandoning him so long ago. When the young Miqo'te runs off, he asks the Warrior of Light to help him discover what had happened to his former friend.

M'rahz learned what had become of M'aht, that the Qalyana had used fruit poisoned with Black Rose to drive the wildlife insane so they would charge the Miqo'te village. M'aht had driven the animals into the gorge, and when he had been infected with a toxin that was petrifying him by an animal, he sealed the entrance to the cave and used his stone body to prevent them from escaping. When M'zhet returned to challenge M'rahz, he revealed the truth to him. He told the youth that if he trained hard, he could take his title and live up to his father's legend. Later, he brought M'zhet back into the clan as a tia, and began training him.