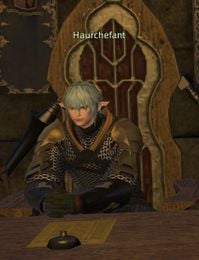 "A knight lives to serve—to aid those in need."

Haurchefant Greystone is the bastard son of Count Edmont de Fortemps, born as a result of the count's sole indiscretion. He was raised together with Lord Edmont's trueborn sons—an arrangement to which his wife strongly objected, forcing the count to ultimately deny Haurchefant the family name. In keeping with tradition, he was given the surname "Greystone," like so many other illegitimate sons and daughters who have been cast by the wayside as pebbles.Despite his status, Haurchefant dreamed of becoming a knight, and he learned much of the chivalric ways from his father while pursuing his private studies of swordplay. He achieved this ambition when, in his seventeenth year, he helped rescue Lord Francel, the fourth-born son of House Haillenarte, who had been kidnapped by bandits, and was granted a knighthood for his deed. He has since seen eleven years of faithful service.

Haurchefant is an Elezen found in Coerthas Central Highlands.