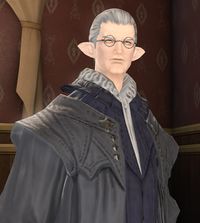 "I have served at his pleasure for more than fifty years, and by the Fury's grace, I shall serve for fifty more."

Once a knight of House Fortemps, Firmien was stationed at Camp Ever Lakes in the Coerthas central lowlands. A wound forced him to put up his blade, and he accepted a post as manservant at Count Edmont's behest. Upon rising to steward, the Elezen found his experience leading men on the battlefield a great boon, and presently coordinates the maneuvers of the hundred or so servants of the High House with ease. Indeed, it is said that the man of sixty-four years has won the loyalty of both maid and manservant alike.Though he still serves the count, Firmien has shared many joys and sorrows with Edmont, and the two have become bosom companions. Firmien also trained a young Haurchefant how to wield the blade, and the lord's death left him truly forlorn.