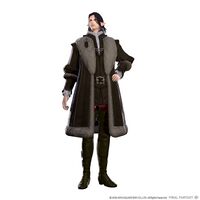 Each of us must play our part in building a brighter future for Ishgard—we who profess to rule most of all.

Artoirel is an Elezen found in Fortemps Manor.

The eldest son and heir to House Fortemps, Lord Artoirel has been keenly aware of his parents' high expectations ever since he was a child. Not wanting to disappoint, he strove to excel in every aspect of his education, becoming an upstanding gentleman and an accomplished knight besides. Yet Lord Artoirel is not without his simple pleasures, such as browsing the Jeweled Crozier in search of new orchestrion rolls.
Though highborn, he has never hesitated to stand on the front lines with his men. When a young commander of not but twenty-five summers, Lord Artoirel rallied his forces to beat back the imperial soldiers who attacked Dzemael Darkhold on the eve of the Seventh Umbral Era.
Out of respect for his mother, he maintained his distance from his half-brother Haurchefant, despite the fact that they both shared similar aspirations. Yet even after she grew ill and passed away, his attitude towards Haurchefant did not improve, and if anything worsened as he came to view his half-brother as something of a rival.