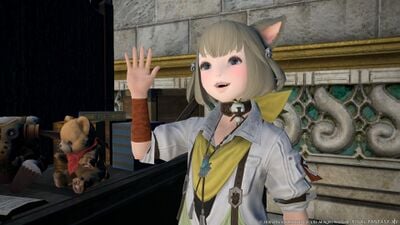 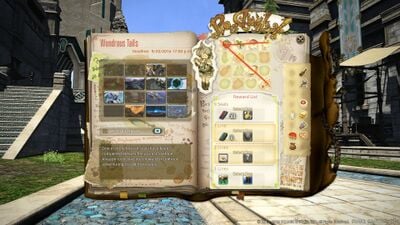 Speak with the NPC Khloe Aliapoh in Idyllshire (x5.7,y6.1) to receive a journal containing sixteen objectives. Please note that no two players will have all of the same objectives.

Upon completing the objectives corresponding to the squares in the journal, you will receive up to 9 seals at random that can be added to your journal.

3. Hand in the Wondrous Tails Journal 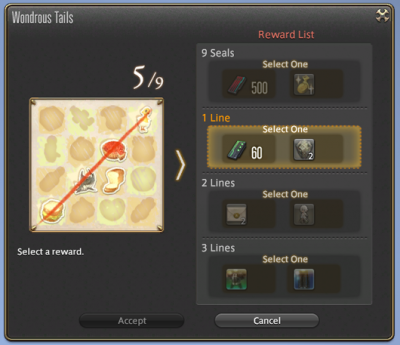 When you have received 9 seals for your journal, deliver it to Khloe Aliapoh, and she will reward you accordingly. You will receive a base reward for obtaining 9 seals, and additional rewards for completing rows horizontally, vertically, or diagonally. A Wondrous Tails journal can only be kept for two weeks, starting from the Tuesday when it was first issued, before it must be handed in for a reward.

Limited Jobs are unable to turn in Wondrous Tails Journals.

This key section of the article is incomplete. You can help the Final Fantasy XIV Wiki by expanding it.
Reason: Duties list might be incomplete; needs confirmation.

Note: Prior to reaching the current level cap, Klhoe's journals will only include duties at level 60 and below. Once you hit the cap, there will be a conversation with Khloe about "new stories" that will indicate you have unlocked the full range of duties.

Exactly four of the following:

Exactly three of the following:

Exactly two of the following:

Exactly two of the following:

plus five of the following:

*These duties will be offered collectively and you will earn credit for completing any of them.

EXP, approximately 50% of a level. Additionally, you may select one of the following items:

When you complete an objective with one or more party members who are new to the duty, you will receive one Second Chance point. You can receive up to 9 points, which can be used as described below.

Retry will allow the player to re-run one of the already completed duties to earn an additional sticker.

Use Shuffle at 7 Stickers to re-arrange your stickers to an optimal position. So if you're lucky with the last 2 stickers, you can receive the 3 Lines Reward.

Khloe Aliapoh is seeking inspiration to breathe new life into her stories. Take up her journal, the Wondrous Tails, and fill it with pages of your heroic feats, that she might craft new tales of her own. The more stories you have to share, the better the rewards!

Khloe Aliapoh fears her stories are not quite what they used to be, as they no longer seem to lift the spirits of her troubled friend. Take up Khloe's journal, the Wondrous Tails, and fill it with pages of your own adventures, that she might be inspired to write new stories of her own!