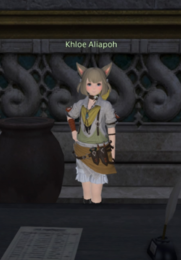 "Khloe likes listening to stories and then making up her own. Can you tell me some of yours?"

Zhloe's sister yearns to follow in her elder's footsteps, and to that end she earns scrips by helping out "Aunt Rowena". The thirteen-year old girl also makes up stories to cheer up T'kebbe, a fellow orphan, and relies on adventurers to provide inspiration. Precisely how she has managed to befriend so many is unclear, though there is some speculation she employs advance techniques she learned from her aforementioned aunt.

Khloe Aliapoh is a Miqo'te found in Idyllshire.

Khloe works out of Idyllshire, where she has set up a stand working for Rowena. It was here that she met the Warrior of Light, and other Adventurers. There she listens to their stories, getting them to write down notable adventures of "derring-do" in journals, and turning them back to her for rare splendors given to her by Rowena. She then shares these stories with the other children at Menphina's Arms to brighten their day.