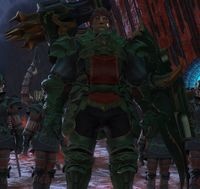 "Bwahahahaha! It's like all my namedays have come at once!"

A native of a province in the mountains of Central Ilsabard, Grynewaht enlisted in the imperial army in order to earn citizenship. Initially assigned the defense of Ala Mhigo as part of the XIVth, he saw little actual combat and spent his days in idle tedium. After the Black Wolf was defeated, however, the remnants of his legion was absorbed into the forces of the succeeding XIIth, and the brawny Roegadyn was sent to investigate ancient ruins in the Carteneau Flats at the head of an expendable unit. An artless brute with a mind only for destruction, Grynewaht is ill suited to tasks requiring any degree of delicacy. At twenty summers, he harbors grand aspirations for promotion, but also lives for the simple things in life, such as tucking into "something tasty" after a hard day's havoc-wreaking. It bears mentioning that Arvina is popular imperial surname among those given to the Roegadyn of his homeland, and he is not related to the former XIVth Legion praefectus, Rhitahtyn sas Arvina. Charon : This powerful new weapon was designed by Aulus mal Asina during his days at the Magitek Academy. While its rapid firing rate is unparalleled even amongst imperial artillery, its consideable heft renders it impractical save in the hands of the brawniest soldiers.


Do Not Sell My Personal Information
Retrieved from "https://ffxiv.consolegameswiki.com/mediawiki/index.php?title=Grynewaht&oldid=306693"
Categories: