The life of an adventurer is the pursuit of fortune and the pursuit of fame. It is the devotion of oneself to seeking out danger and glory wherever they might lie. It is an endless quest taken up only by the most intrepid and dauntless of souls.

The term came into popular use among the people of Eorzea little more than a decade ago. Left idle by the onset of the Age of Calm, a leading mercenary officer gathered to his side a number of trusted companions, and together they formed a guild dedicated to the common cause of aiding the realm at large.

Outside the modest station of their humble beginnings, a simple sign hung for all to see―Adventurers' Guild.

The Adventurers' Guild has since spread, and can now be found in each of the realm's great nations. It is here that Eorzeans come with their myriad pleas and requests, and here that adventurers heed the call, whether it be the slaying of some foul beast plaguing the countryside, or the crafting of fine wares demanding a master's touch.

What greatness lies in store for you, adventurer? 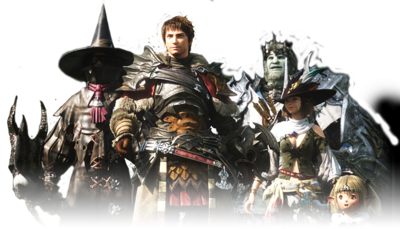 During the time of the Age of Stability, when the city-states began mending the bonds they once shared, those who had become wealthy or had made a life out of battle soon found themselves without a battlefield. Fearing losing their way of life and everything they knew, many turned to making a life performing odd jobs or joining guard detail for a major city-state. However, following the mobilization of city guards into a standing military that could act at a moments notice, these former sellswords were running out of options, with some turning to violence and thievery to survive.

Fearing the situation would only worsen, the leaders of each nation came together to form a network of guilds to provide these men and women with work, putting them in contact with citizens in need. This was the beginning of the Adventurers' Guild, and the start of mercenaries turning to adventuring as a living. Thus, the age of the Adventurer had begun.

While the adventurer party depicted in A Realm Reborn promotional materials very strongly resemble Ardbert, Branden, Nyelbert, Lamitt, and Renda-Rae, and that was done intentionally, they are not the same characters.