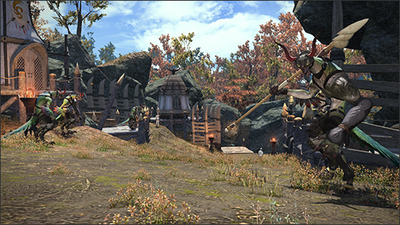 Ixali Daily Quests are Daily Quests released in Patch 2.35 of A Realm Reborn. They are located in the North Shroud at Ehcatl (x24,y22). Unlike other Tribal Quests, players will craft items, not battle enemies, in order to complete the Ixali quests.

In order to craft the items required for Ixali quests, players must make use of special crafting facilities. After obtaining the required materials in the course of the quest, the player must then present them to the workshop supervisor before using their crafting facilities. After preparing the workspace, the supervisor will then furnish you with the exact amount of materials required for your task, and you will be granted access to the facility for a limited amount of time as indicated by the effect placed on your character. This effect also limits your crafting capacities to some degree, usually by lowering your CP.

In addition to the special crafting facilities, players must also equip a pair of

Ehcatl Wristgloves, which can be acquired early in the course of the main quests (as well as repurchased from the vendor). With the Ehcatl Wristgloves equipped, select the recipe designated by your quest from the Tribal section under Special Recipes in your crafting log to begin synthesis.

In the event you run out of time, your synthesis fails, or the item quality is not that requested by the quest giver, speak with the workshop supervisor to receive additional materials and resume your crafting attempt.

A Bad Bladder which requires the level 41 MSQ

Deliverance) differ from normal story quests in that to complete them, players must deliver various requested items. You will earn quota points for each item submitted during a delivery quest. Only by earning enough points will you meet your quota and complete the quest.

The quota which must be met to complete the quest will change depending on your reputation. Please be advised that your quota will increase if your reputation rises while undertaking a delivery quest.

A list of requested items can be viewed by selecting Timers located under Duty in the main menu, which will be renewed daily at 8:00 a.m. (PDT) (Earth Time). Please be aware that changes to the list may render certain items undeliverable until a later time.

Upon completing a delivery quest, players will be awarded experience points to the Disciple of the Hand class associated with the quest item. The class is indicated via icons on the list of request items in the Ehcatl Nine Delivery Quests window of the Timers interface.

A maximum of one delivery quest can be undertake per day (Earth time). Upon either completing or abandoning a quest, you must wait until the next day before a new quest becomes available. In the event a delivery quest is abandoned, daily quest allowances will not be refunded.

Ixali Oaknot with the Ixali Vendor for rewards based on Reputation rank.

The Ehcatl Nine, a group of outcast Ixal, labor to build the airship Dezul Qualan so that they can return to the Ixal's lost paradise. Adventurers will be called upon to aid them by crafting the necessary components.

Adventurers can undertake different beast tribe quests every day, learning more of each tribe and improving relations with them as they do so. As you come to understand the ways of the beast tribes, you shall find yourself well rewarded for your diplomatic endeavors.