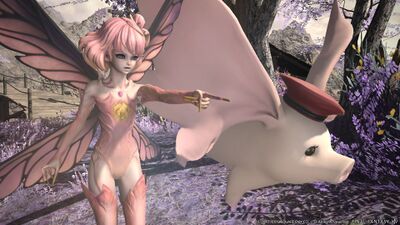 Pixie Daily Quests are Daily Quests released in Patch 5.1 of Shadowbringers. They are located in Il Mheg at Lydha Lran (X:12.4 Y:32.9).

The pixie tribal main quests and daily quests will employ an automatic level adjustment system known as quest sync, which will match the difficulty of the battles to the player's current job and class levels. Any experience received upon the completion of these quests will be adjusted accordingly. Furthermore, certain quests will not allow players to proceed with a class or job that is different than when they accepted them.

Fae Fancies with Jul Oul in Il Mheg (x12.4,y32.9) for rewards based on Reputation rank.

Vrandtic folklore holds that pixies have a penchant for visiting the dreams of mortals. Assuming there is truth to this legend, what manner of dreams might these mischief-loving souls bring with them? If you would know the answer, close your eyes, suspend disbelief, and step into Lyhe Mheg─the fantastical Garden of Dreams...