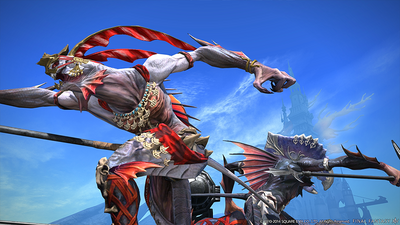 Sahagin Daily Quests are Daily Quests released in Patch 2.2 of A Realm Reborn. They are located at Novv's Nursery in Western La Noscea (x17,y22).

They Came from the Deep which requires the level 41 MSQ

Trusted is the maximum rank attainable through Sahagin missions. However, after attaining the maximum rank for all five tribes from A Realm Reborn (Amal'jaa, Kobold, Sahagin, Sylph, and Ixali), players can unlock Allied (Rank 8) Reputation by completing the Allied Tribal Quests. Ranks 5-7 do not exist for the Sahagin.

Rainbowtide Psashp with the Sahagin Vendor at (X:16 Y:22) for rewards based on Reputation rank.
The vendor also sells assorted crafting materials.

Though bloodshed and carnage are common connotations for the beast tribes of Eorzea, there exist those among them whose brutish exteriors conceal honorable intentions and a desire for peace and tranquility. Already, adventurers' valiant efforts have served to strengthen diplomatic relations with the Amalj'aa and the sylphs. But as the realm continues to struggle, our eyes now turn to the Sahagin and kobold tribes, and the plight of these troubled beastmen.