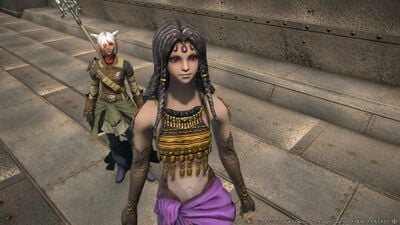 Ananta Daily Quests are Daily Quests released in Patch 4.2 of Stormblood. They are located at Castellum Velodyna in The Fringes (X:21.7 Y:26.2).

The Silence of the Gods.

Brooding Broodmother can be unlocked by completing

The Rose Blooms Twice, which is the conclusion of a split quest line beginning with Aether Current quest

The Hidden Truth and sidequest

The Ananta main quests and daily quests will employ an automatic level adjustment system known as quest sync, which will match the difficulty of the battles to the player's current job and class levels. Any experience received upon the completion of these quests will be adjusted accordingly. Furthermore, players will not be allowed to proceed with a class or job that is different than when they accepted any of these quests.

Ananta Dreamstaff with Madhura for rewards based on Reputation rank.

The Vira, one of the tribes of snake-like Ananta, have long supported the efforts of the Resistance by sending warriors to bolster their ranks. One such battlemaid is Alpa, the broodmother's daughter, who makes up for her lack of prowess in combat with her courage and ingenuity. She dreams of making a grand contribution to the Resistance, but many bizarre and perilous trials must be overcome before her plans can come to fruition.