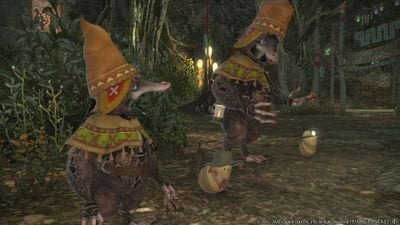 Qitari Daily Quests are gathering-oriented Daily Quests released in Patch 5.2 of Shadowbringers. They are located in The Rak'tika Greatwood at Hopl's Stopple (X:37.2 Y:17.5), nearest the Fanow Aetheryte.

The Stewards of Note.

The Stewards of Note can be unlocked by completing

Protectors of the Wood, which is the conclusion of a split quest line beginning with two Aether Current quests

The Great Deceiver and

The Qitari tribal main quests and daily quests will employ an automatic level adjustment system known as quest sync, which will match the difficulty to the player's current class level. Any experience received upon the completion of these quests will be adjusted accordingly. Furthermore, certain quests will not allow players to proceed with a class that is different than when they accepted them.

During the tribal main quests, the player will have the option to agree with one of two NPCs at several points. These choices will affect the way in which the quests unfold and the appearance of the tribal settlement.

Driven from their ancestral home during the Flood and forced to live in exile for a hundred years, a bewhiskered tribe of scribes and scriveners makes their triumphant return to the Rak'tika Greatwood. Heed the call of the guardian of ancient Ronka and probe long-forsaken subterranean hollows, that these stewards of lost knowledge might reclaim their legacy.