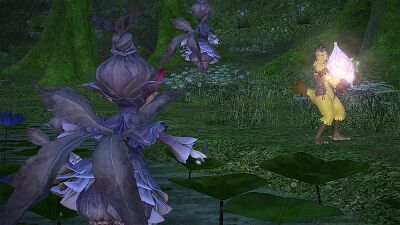 To unlock the Sylph Daily Quests, player must complete the level 42 quest

Seeking Solace. Players can start the quest by talking to Vorsaile Heuloix in New Gridania (x9,y11). Players must have previously completed the level 41 MSQ

Sylphic Goldleaf with the Sylphic Vendor at (X:22.3 Y:26.3) for rewards based on Reputation rank.
The vendor also sells assorted crafting materials.

Many and myriad peoples call the realm of Eorzea home. Making their homes in the various regions of Thanalan, La Noscea, and the Black Shroud, the beast tribes are her denizens as well. While there are those who call forth the primals, causing harm to outsiders, others choose to live in harmony with their neighbors.

Adventurers can undertake different beast tribe quests every day, learning more of each tribe and improving relations with them as they do so. As you come to understand the ways of the beast tribes, you shall find yourself well rewarded for your diplomatic endeavors.