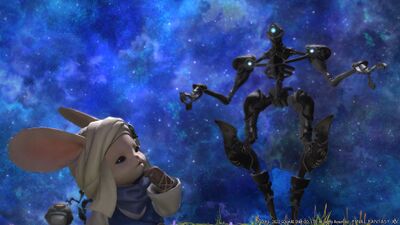 Omicron Daily Quests are gathering-oriented Daily Quests released in Patch 6.25 of Endwalker. They are located in Ultima Thule at A-4 Research (X:27.7, Y:24.4).

The Café at the End of the Universe.

The Omicron tribal main quests and daily quests will employ an automatic level adjustment system known as quest sync, which will match the difficulty to the player's current class level. Any experience received upon the completion of these quests will be adjusted accordingly. Furthermore, certain quests will not allow players to proceed with a class that is different than when they accepted them.

The recently established Last Dregs may yet lack much one expects of a café─a recognizable logogram, little jars of creamer, patrons─but Omicron N-7000 and not-Omicron Jammingway persevere. These unlikely partners in coffee are determined to brew fresh hope until Ultima Thule brimmeth over!