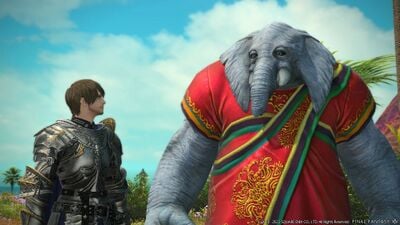 Arkasodara Daily Quests are Daily Quests released in Patch 6.15 of Endwalker. They are located in Thavnair at Svarna‎ (X:20.4 Y:28.4).

Hippos Born to Run which requires the level 90 MSQ

Hippos Born to Run can be unlocked by completing

A Budding Adventure, which is the conclusion of a split quest line beginning with Aether Current quest

What's in a Parent.

The Arkasodara tribal main quests and daily quests will employ an automatic level adjustment system known as quest sync, which will match the difficulty of the battles to the player's current job and class levels. Any experience received upon the completion of these quests will be adjusted accordingly. Furthermore, certain quests will not allow players to proceed with a class or job that is different than when they accepted them.

Arkasodara Pana with Ghanta in Thavnair (x20.4,y28.4) for rewards based on Reputation rank.

Hulking in stature and kind at heart, the Arkasodara are known for their alchemical ingenuity and...hippo carts!? Follow a crew of young upstarts seeking to blaze a new trail across Thavnair's history and ride like no one has ridden before. On your mark─the open road awaits!