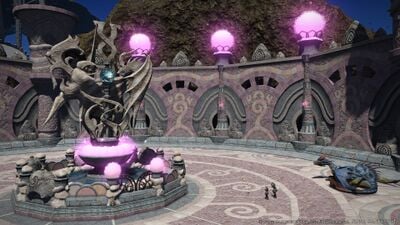 Moogle Daily Quests are Daily Quests released in Patch 3.3 of Heavensward. They are located at Bahrr Lehs in The Churning Mists (x15.7,y28.8). Similar to Ixali Daily Quests, these quests are for Disciples of Hand.

Tricks and Stones (speak to Seething Stonemason in The Churning Mists (x27,y34)).

Tricks and Stones is only unlocked after a long chain of side quests. These side quests are marked with the yellow icon, not the MSQ meteor icon nor the blue feature icon.

Moglin's Judgment, it is better to wait until the Level 56 Main Scenario Quest

He Who Would Not Be Denied, which is necessary for the final set. You should also be able to fly in the Churning Mists.

For the first set of quests, follow Mogleo on his adventures to help his fellow Moogles. You will have to travel in-between quests to find and follow him:

Then, talk to Mogloo (x30, y36) to begin the following quest chain:

Next, teleport to Ishgard (The Pillars), The Last Vigil, and talk to the Unflinching Temple Knight (x11.5 y11) in front of Fortemps Manor to begin the following quest chain:

Tricks and Stones (Disciples of the Hand required) which you can initiate by speaking to Seething Stonemason in The Churning Mists (x27,y34).

Though additional quests are made available at each reputation rank, there will only be three quests chosen at random available each day. Additionally, your current rank determines the number of

The Moogle tribe vendor, Mogmul Mogbelly can be found at (X:15.9 Y:28.5). In addition to the items sold by reaching the each reputation rank this NPC also sells the 48-55 Disciple of the Hand and Land tools and 51-55 gear.

In ages past, Zenith stood proudly in the Churning Mists as a testament to the bond between man and dragon. Alas, this once great sanctuary now lies in ruin. Though its remains are lost to the wilds, the moogles who call this land home would fulfill an age-old pact with Hraesvelgr to see the great wyrm's home restored to its former glory.