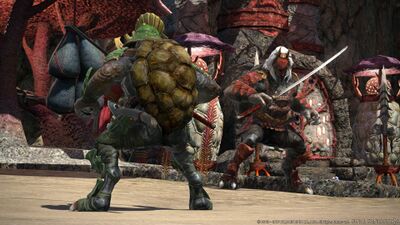 Kojin Daily Quests are Daily Quests released in Patch 4.1 of Stormblood. They are located in The Ruby Sea at Tamamizu (x29.3,y16.8).

Heaven-sent which requires the level 63 MSQ

Tide Goes in, Imperials Go Out.

The Kojin main quests and daily quests will employ an automatic level adjustment system known as quest sync, which will match the difficulty of the battles to the player's current job and class levels. Any experience received upon the completion of these quests will be adjusted accordingly. Furthermore, players will not be allowed to proceed with a class or job that is different than when they accepted any of these quests.

Kojin Sango with Shikitahe for rewards based on Reputation rank.

Though divided into two factions, the Red and the Blue, all Kojin have labored since time immemorial to gather treasures they believe serve as vessels for the divine. The Red Kojin achieve this goal through violence, once serving as mercenaries for the Garlean Empire. With imperials now gone, however, they have chosen to take control of the treasure vault of the Kojin knowing full well their Blue brethren will not raise arms against them. Instead, the Blue Kojin now seek to create their own treasure vault. What hardships will they encounter in their endeavor to honor the divine?