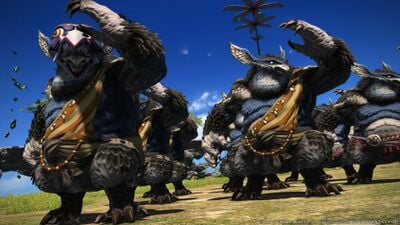 Vanu Vanu Daily Quests are Daily Quests released in Patch 3.1 of Heavensward. are the the Tribal Quests for the Vanu Vanu race. They are located at Ok' Gundu Nakki in The Sea of Clouds (x6,y14).

Three Beaks to the Wind which requires the level 57 MSQ

A Difference of Opinion.

The Vanu Vanu main quests and daily quests will employ an automatic level adjustment system known as quest sync, which will match the difficulty of the battles to the player's current job and class levels. Any experience received upon the completion of these quests will be adjusted accordingly. Furthermore, players will not be allowed to proceed with a class or job that is different than when they accepted any of these quests.

Like the five ARR Tribals, the Vanu Vanu begin at 'Neutral' (rank 1). The maximum rank obtainable through missions is 'Bloodsworn'. 'Allied' is unlocked by completing the Allied Tribal Quests, after having attained the maximum rank for the three Heavensward Tribes.

Vanu Whitebone with Luna Vanu for rewards based on Reputation rank.

The Vundu tribe, having summoned the primal Bismarck, wasted no time in establishing dominance over other Vanu Vanu tribes and claiming the Sea of Clouds as their own. The peaceful Zundu tribe continue to oppose their tyranny, however, and now seek the aid of an adventurer to help their people.