"We must right the wrongs of antiquity and move forward as a nation united."

Ser Aymeric de Borel is the lord commander of the Temple Knights. He was adopted at birth by an aged viscount of House Borel, whose wife was barren. Though they treated him as their own flesh and blood, rumors of his status as a bastard and his father's true identity eventually found their way to him. And so, after being inducted into the Temple Knights, Ser Aymeric hoped he might one day be granted an audience with the archbishop to learn the whole truth.The thirty-two year old Ser Aymeric's political views, as well as his distaste for petty power struggles, are largely a result of his upbringing, particularly his keen awareness of the limitations placed upon an individual for the circumstances of their birth. The lord commander is a remarkably modest man, and shirks the fine cuisines of the capital, instead choosing to break the same bread as any common soldier. The one pleasure in which he indulges is a dash of rich birch syrup in his morning tea, ever so subtly. However, Ser Aymeric is more than capable of conducting himself with dignity and aplomb when attending the many galas held by Ishgard's elite—participation in which is necessary for any who would gain and wield political influence. Accordingly, he has developed a reputation as a fashionable nobleman and a skilled dancer, and is often the subject of conversations between highborn ladies.

Naegling: Ser Aymeric's sword, Naegling, is a Borel family heirloom once used to slay dragons. Ser Aymeric's foster father prayed it would grant him strength in the struggles to come, both on and off the battlefield.

Aymeric is an Elezen found in Coerthas Central Highlands. 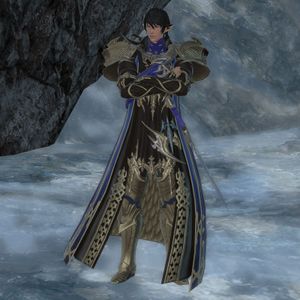 After hearing the rumors of the deeds of the Warrior of Light and the Scions of the Seventh Dawn, he sought a meeting with both the Warrior and Alphinaud Leveilleur. Though he did not seek to change the policies of Ishgard, he was willing to maintain a steady supply of goods to Mor Dhona despite the desire within Ishgard to cut them off, but would ask that they keep an eye over Lake Silvertear and the Keeper of the Lake, as the Astrologian's of Ishgard believe that the Dragon Star flaring brightly is a sign that Midgardsormr will return. When an Ishgardian soldier enters and tells the group that heretics have raided another caravan, he implores the Warrior of Light and Alphinaud to investigate.

Following the resolution of the investigation into Lady Iceheart and Shiva, Aymeric met with the Warrior of Light and Alphinaud to thank them for their hard work, as he doubted that his knights could handle such a threat. When Alphinaud accused Ishgard of using Mor Dhona to defend one of their borders, which Aymeric conceded to. He explained that Ishgard was vehemently against reopening its borders to the other nations, but he is hoping to use his position and recent events to change that.

When Nidhogg rallied the Dragons to attack Ishgard, Aymeric oversaw the defense of the city and reached out to the Scions of the Seventh Dawn and the Crystal Braves to assist driving the Dravanian Horde off. When part of the ward, Daniffen's Collar was disabled by Lady Iceheart, he aided in directing the different squadrons on the Steps of Faith. Thanks to their bravery in this battle, Aymeric expressed his gratitude and that he was indebted to the Warrior of Light.

Aymeric later attended the Sultana's banquet, and was present for the coup of Teledji Adeledji and the Crystal Braves, but he and Lucia goe Junius were quickly rushed away under the premise of a "Dravanian attack" that required their attention, and did not witness the peak of the events that transpired there. When the Warrior of Light, Alphinaud and Tataru Taru were granted asylum with House Fortemps, he offered to assist them in any way he could.

When Alphinaud requested he hold back from attacking the Dravanian Horde as he and the Warrior of Light intended to parley with them in an attempt to end the war, Aymeric delayed their counter offensive until they can meet with Hraesvelgr. However, when they return with the truth of the start of the Dragonsong War, Aymeric made directly for The Vault to confront his father and bring the truth to the people. For his efforts, he was told that these things would turn their society on their head and the fallout would only bring ruin to their people. Aymeric was then taken to the gaol beneath The Vault to be held before being condemned as a heretic. He was later rescued by the Warrior of Light, Alphinaud and Haurchefant, though the latter lost his life protecting the Warrior of Light from an attack. With the Dragonsong War coming to a head, Aymeric stayed behind in the city to maintain some semblance of order.

Following the death of Archbishop Thordan VII, Aymeric was put in charge of the city-state temporarily until a more suitable leader could be found. For his part, he intended to use his newfound position of authority to impact direct change in the nation, reaching out to the Dragons in the hopes they would send a representative to a peace talk he arranged. He also signed a treaty for Ishgard to re-enter the Eorzean Alliance.

Talks of peace with the Dravanian Horde had, naturally, put the people of Ishgard on edge, with many believing that Aymeric had removed Thordan from his place as ruler through treasonous means. A fundamentalist group named the True Brotherhood of the Faith began rounding up refugees and burning homes, especially in The Brume. When an investigation was launched, it turned out that these refugees were being held hostage in The Vault until Aymeric stepped down and submitted to trial for patricide. Instead, he immediately established a perimeter and began deploying the knights to handle any fanatics that may launch an attack. He and the Warrior of Light charged in and freed the refugees. When they reached the top of The Vault, they found a priest dangling a child over the edge of the ramparts, telling them that he would not surrender to "one who breaks bread with the enemy and calls him brother", and that any who die is on Aymeric's hands. With that, he threw the girl from the rampart.

Fortunately the Dragon Vidofnir caught the child, saving her life. She had arrived to warn the Aymeric that Nidhogg's horde had recently begun to move again, and this one act helped to , if only a little, assuage the fears of the public. It was not enough to completely change their hearts and minds, however, for that night an assassin drove a dagger into his stomach in an attempt to kill him. Luckily, Artoirel de Fortemps and Count Edmont de Fortemps were there to apprehend the assassin and get him the help he needed.

Following an unpleasant protest at Falcon's Nest that ended in a protestor being shot with arrows, Aymeric held the Grand Melee, a contest of warfare, and invited the Grand Companies as a way to strengthen bonds and lift the spirits of the people before the conference. The Melee was a great success, with the Warrior of Light facing off against Raubahn Aldynn, the leader of the Immortal Flames and winning in the name of Ishgard.

The next day, Aymeric held the peace conference, unveiling a new installation showing Saint Shiva and Hraesvelgr intertwined. It seemed that the conference would end on a positive note, unfortunately this was not meant to be. Nidhogg's Shade, in the body of Estinien Wyrmblood, crashed the conference, driving his lance deep into Vidofnir's back and telling those present that his revenge is far from over, and he will see Ishgard razed to the ground. Aymeric grabbed the bow of a nearby soldier and loosed an arrow at the Nidhogg/Estinien shade, but to no avail. Nidhogg assumed his dragon form and took off into the sky, prompting the chant Death to Nidhogg from those at the conference.

Aymeric, along with the Warrior of Light and Alphinaud, beseeched Hraesvelgr for aid in the final battle against Nidhogg. Though the wyrm expressed his own anger at humanity for taking his sister Ratatoskr from him all those centuries ago, he agreed that they may yet reignite the flame of hope in his heart, or extinguish it forever. After proving themselves capable enough to handle Nidhogg through his trials, they rode back to Ishgard which was currently under attack. Aymeric fought alongside the other knights and the Dragons alike.

When the Dragonsong War finally reached its end, Aymeric separated church and state, converting Ishgard to a republic, putting the future of Ishgard into the people's hands, with the House of Lords and the House of Commons so all peoples were represented. Unsurprisingly (to Aymeric, at least), he was officially elected to the highest seat of the House of Lords, and named the Azure Dragoon of the people. Privately, he expressed to the Warrior of Light that he would much rather be on some grand adventure, but he was now bound to duties to the people.

Later, Aymeric would lead the temple knights in the liberation of Ala Mhigo, holding back legions of Garlean soldiers while the Warrior of Light led the charge to the throne room. Aymeric also acted as the representative for Ishgard during the parley with the Empire, and attempted to reason with the Emperor to lay down his arms and join with Eorzea, but was called a fool for his efforts.

Aymeric would also fight on the battlefield of Ghimlyt Dark, repelling the Empire's forces. He also helped rescue the Warrior of Light when they collapsed, bringing them to the chirurgeons, and helped secure Alisaie Leveilleur's body when she was found catatonic.

Much later, while the Warrior of Light and the Scions were working on a cure for Tempering, he ensured that a trade route for crystals would be secured with the Skysteel Manufactory. He also joined them in meetings in Ala Mhigo, promising Ishgardian aid in dealing with the threat the Towers posed to Eorzea. He also dragged Estinien to join the Scions, whether he liked it or not.