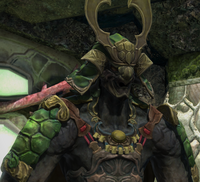 Tamamizu is open to you, friend. Full glad are we to welcome any and all, and the treasures they might bring unto us.

Bunchin is a Spoken found in The Ruby Sea. He is the elder (and thus, leader) of Tamamizu, and makes an appearance in a number of quests involving the Blue Kojin.

The Kojin believe that newborn souls reside in an object for a time before passing into an egg, and it is from these objects that Kojin gain their individual qualities, as well as their names. Bunchin, a venerable Kojin of the Blue, and the elder of Tamamizu, is named after the Far Eastern word for "paperweight." In the past, his peers often mocked him for his slow and languorous[1] motions, and even as the dignified leader he has become, Bunchin does not care to be addressed by this unflattering appellation. In all other things, however, the elder's generosity is as an unbound sea, and the favorable relationship which now exists between adventurers and the Blue is in large part by virtue of his compassionate leadership.