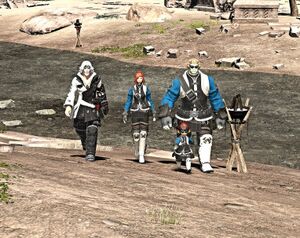 The core members of Garlond Ironworks

"Technology should never be allowed to imprison people. That's a hard lesson I learned from watching Gaius... and my father"

The Garlond Ironworks was built in Eorzea after Cid Garlond defected from Garlemald and came to the land. It is made up of talented engineers and works to bring advancements to the people under the banner "Freedom through Technology".

The Garlond Ironworks was established in the Sixth Astral Era in 1562 after Cid Garlond defected from the Empire. He established the Ironworks to spread the knowledge and use of Magitek throughout Eorzea to lessen the monopoly of the Empire on it.

When Cid left the Empire, there were those who looked up to him or admired him, and left to follow wherever he took them. Together with the defectors and promising engineers from all over Eorzea, the Ironworks craft many marvels of technology, like airships and ceruleum-powered trains.

A year after he defected, Cid mastered the craft of building airships, and the Ironworks focused on building a citizen-class model for common travel, and made them completely craftable using only resources found in Eorzea. They forged a partnership with Highwind Skyways and mass-produced them, and have revolutionized the way Eorzeans travel.

Cid is the head of the company in name, but went missing for over five years after the great Calamity. During that time, Jessie Jaye ran and steered the company, and dealt with the everyday tasks that kept the Ironworks afloat. Even now, after his return, Jessie manages the company, and specializes in creating equipment with Magitek, and even has an exclusive contract with Rowena and her House of Splendors.

After the capture of Minfilia and the attack on the Scions of the Seventh Dawn, the Warrior of Light and Cid devised a plan to break into Castrum Centri. They come back into contact with Biggs and Wedge during the breakout, and manage to free them with the others.

After their rescue, the Garlond Ironworks worked with the Eorzean Alliance to devise a plan to lay seige to Castrum Meridianum to stop the Empire's plan to use the Ultima Weapon to subjugate the Eorzeans, and rescue Thancred from the Ascians. They taught the Warrior of Light to use Magitek Reaper armor and helped them use it in the invasion to get past the Empire's defenses. The Ironworks flew the Enterprise to deliver the Warrior of Light into the heart of enemy territory, and flew in to save them after the destruction caused by the Ultima spell and the explosion of the Ultima Weapon.

Following the destruction of the Ultima Weapon, Cid realized the dangers posed by the ancient Allagan weapons, the Ironworks worked with NOAH and the Sons of Saint Coinach to excavate the site believed to be where the Crystal Tower fell into the earth during the Fourth Umbral Calamity.

Cid and the Ironworks come up with a solution to handle the Eight Sentinels guarding the tower, the use of elemental crystals to overload the statues, destroying them and opening the way. After the Warrior of Light cleared the way through the Labyrinth of the Ancients, the Garlond Ironworks rejoined NOAH to survey the area.

During the expedition, Nero, now exiled from the Empire, joins the Ironworks. At the top of the tower, He is captured by the Cloud of Darkness and Cid retreats to come up with a strategy to save him, Unei and Doga.

The Ironworks devise a way to open a portal to the World of Darkness, and the Warrior of Light defeats the Cloud of Darkness. Cid manages to save Nero, and they witness the sealing of the tower.

After the assassination of the Sultana and the exile of the Scions and the Warrior of Light, and their escape to Ishgard, the Garlond Ironworks is hired to work on the airships in Ishgard. Cid rescued the Warrior from the Vanu Vanu and flying them from the Sea of Clouds. Later, when the Warrior and the Azure Dragoon Estinien Wyrmblood needed help to reach Nidhogg in the Aery, Biggs and Wedge created the Manacutters, personal aircraft that let them reach the top of the Aery. The Ironworks were also instrumental in figuring out a method to pierce the barrier surrounding Azys Lla to continue the pursuit of Thordan VII, as well as stopping the massive primal Alexander when the Illuminati summoned it in the Dravanian Hinterlands.

After the release of Omega to deal with Shinryu, Cid and the Ironworks are pursuing the machine. They believe it crashed somewhere near Baelsar's Wall. Cid says he'll send Tataru to the Warrior of Light when they find it.

Later, after the defeat of Zenos yae Galvus, They discover a crater where they believe Omega crashed. Jessie hired Nero and he assisted in investigating the crash site, much to Cid's chagrin.

At the crash site they find a rift and enter into it with the Warrior of Light. They discover Alpha, a small creation similar to a Chocobo. It turns out that Omega is opening rifts into other worlds to find the strongest being in existence and pitting them against each other so it may learn from them and evolve. It forced the Warrior of Light to participate in its combat trials in order to keep their world safe, otherwise Omega would commit mass genocide. Omega also attacked the members of the Ironworks, determining them to be inferior life forms. While they weren't killed they were severely injured, and needed to be taken out of the Interdimensional Rift to be healed. The only members that remain are Cid and Nero.

During the next set of combat trials, Nero ends up injured as well, and Cid had to take him to be looked after as well, then return to the Rift to provide support to the Warrior in the final trials of Omega. They use technology devised by Cid's late father Midas to help in the fight against Omega, and the Warrior is able to finally defeat Omega.

After the defeat of the Ruby Weapon, Gaius van Baelsar and the Warrior commission Cid and the Ironworks to use the skeleton of the G-Warrior they found in the Fractal Continuum, which they use to defeat the Sapphire Weapon and liberate the village of Terncliff. Cid is able to determine based on the information they collect around the village that the newest weapon, the Emerald Weapon, has been moved to another location and is most likely still incomplete. He later upgrades the G-Warrior into the G-Savior, a massive carrier that they use to defeat the Diamond Weapon and put an end to the VIIth Legion and their Weapon program.