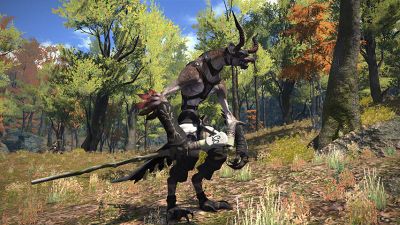 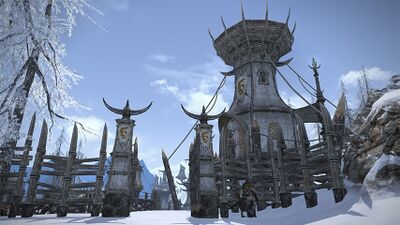 Natalan in the Coerthas Central Highlands

Ixal is one of the Beast Tribes.

Claiming the wind-blasted canyons of Xelphatol as its domain, this aggressive mountain tribe makes frequent forays into the Black Shroud to fell trees in the name of its fickle goddess. Heedless of the will of the elementals, the Ixal and their practices are at violent odds with the forest nation of Gridania.

Tall and long of limb, the rangy Ixal have birdlike heads with distinctive beaks and horns. Historical records state the race was once capable of flight, but the wings that graced the arms of earlier generations are no longer in evidence. Roosting in Xelphatol appears to have wrought a change in the Ixal's physiology, and over the span of five centuries the chicks born to the tribe exhibited fewer and fewer feathers, until eventually vestigial clumps around the elbow were all that remained to be seen.

The Ixal are omnivorous, and consume a wide range of fare such as leafy and root vegetables, fruits and meats. Little effort is expended in food preparation, and most Ixali cooking has advanced little beyond basic stews and broths. Despite this general disinterest in the arts of cuisine, however, the tribe is also known for having developed several curing and smoking techniques.

A matriarchal society, the chieftains of the major ixali flocks are descendants of the so-called "Skysent" bloodlines-Nomotl, Pahuotl, Huatotl, and Xlotl. These leaders in turn serve a monarch who rules by virtue of an enigmatic object known as the Windseed.

Though the tribe itself does not understand the truth of its origins, the first Ixal were in fact the chimeric creation of the Allagans known as "Iksalion". Developed for deployment as an airborne division, these laboratory inventions were indoctrinated to unfailingly obey the instructions of specific individuals in order to ensure an unbroken chain of military command. The present rigid social structure of approximately a tenth of the population occupying the command class, a fifth comprising the middle class, and the remainder forming the laborer class. Even generations removed from their race's inception, it is extremely common for descendants of the superior commander bloodlines to hold positions of leadership within a flock.

The forenames of the Ixal are decided by adding a consonant to a base word-a term determined by both gender and the direction the wind is blowing at the time of hatching. For example, the term for a male who hatched during an easterly wind is "Ozol", to which the consonant "L" might be added to create "Lozol". It is a common belief amongst the Ixal that an individual's temperament and personality are strongly influenced by his or her "birth wind". Ixal surnames serve to represent their position in the tribe's social hierarchy:

The adjective form is Ixali.

The Ixal have sought to till the barren land of the canyons since their migration to Xelphatol, but attempts to raise crops that were once planted in lush forest soil have met with limited success. Poor yields are supplemented with extensive hunting and foraging.

Ixali dwellings are constructed with lumber, and many of the tribe's tools are carved from wood. With the scarcity of suitable trees in Xelphatol, however, the tribe often resorts to sending war balloons into the Black Shroud, where logging crews descend to harvest the thick boles of the forest giants.