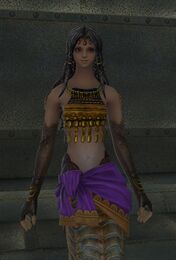 "What were you saying about our guest being 'lovesick?' What kind of love makes you sick?"

Alpa is the only daughter of Sarisha, the Vira broodmother. Although unskilled in battle, Alpa wished to play a part in Gyr Abania's emancipation, and enlisted in the Ala Mhigan Resistence as metalsmith. Upon hearing of the Warrior of Light's exploits, however, she was inspired to request the position of guard caption at the newly liberated Castellum Velodyna. Her superiors granted the request, and immediately following her seventeenth nameday, she assumed command at the border outpost with her adjutant, J'olhmyn. Cultural differences between the Ananta and Ala Mhigan members proved problematic, but Alpa would overcome these challenges and more through steadfast bravery and even-handed diplomacy.

Alpa is an Ananta found in The Fringes.