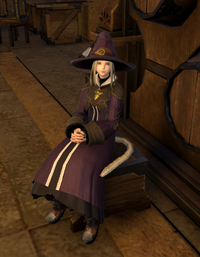 "It won't be long before everybody sees us for the heroes we is!"

Formerly of the Circle of Knowing, Una was once part of a crew that included the pugilist Percevains and the archer Satzfloh. Following the Calamity, the Keepers of the Moon briefly lost her memory, but was quick to recover. Alas, she was struck down at the age of twenty-eight in the Garlean raid on the Waking Sands.

Una Tayuun is a Miqo'te found in Western Thanalan.

Una Tayuun is a Seeker of the Sun, but she has a Keeper of the Moon style name. This may just be an oversight.