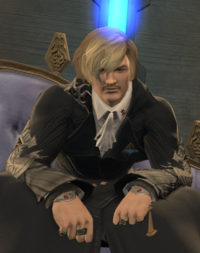 Jenomis cen Lexentale is a Garlean found in various locations.

Jenomis cen Lexentale, his real name being Arazlam Durai, is a male Garlean NPC. He a famous Garlean playwright and principal of the Majestic Theater Company. Jenomis dedicates his life to uncovering the truth of Ivalice and, in the process, clearing his family's name.

Dialogue set to change in Patch 4.3 to coincide with new story developments.

Jenomis cen Lexentale: Ah, the liberator. If even half of what Cid told me is true, your exploits would translate well to the stage. Perhaps, when my life's work is done, and the secrets of Ivalice have been laid bare, I shall consider penning a new play.

Jenomis cen Lexentale: Alas, that day may be long in the coming... though each hour brings with it a new discovery... <sigh>

Jenomis cen Lexentale: Forgive me. Was there something you wished to discuss?

Who exactly was the original Ramza?

Jenomis cen Lexentale: As I mentioned, Ramza does not appear in the legend of Delita's miraculous rise to power. For his part in the tale, we must look to the Durai Papers.

Jenomis cen Lexentale: My ancestor's account states that Ramza was the youngest son of one Barbaneth Beoulve, the lord of a noble house of high standing. He was the same age as Delita, whom Lord Beoulve took in following the death of his parents. The two boys would have grown up together, side by side. Yet while the legends are strewn with references to Barbaneth's elder sons, his youngest is conspicuously absent.

Jenomis cen Lexentale: According to the Durai Papers, this is because the Church of Glabados branded Ramza a heretic, and had his name erased from the annals of history.

Jenomis cen Lexentale: My research has yet to reveal why the church would do such a thing, and why his own blood would seemingly condone the act.

Jenomis cen Lexentale: For what it is worth, however, the author of the Durai Papers was firmly convinced that Ramza was the true hero of the legends of Ivalice -- a true Zodiac Brave.

What was the relationship between Ramza and Delita?

Jenomis cen Lexentale: Delita was born into a family of serfs -- the Heirals -- who tilled land owned by House Beoulve. When Delita's parents succumbed to the Black Death, Ramza's father took the boy and his younger sister Tietra into his home and raised them as he would his own children. It is at this time that I believe Delita and Ramza became friends, growing up as equals unbound by societal constraints of blood and birth.

Jenomis cen Lexentale: According to legend, Lord Barbaneth was quick to recognize that young Delita's talents extended beyond working the land, and so he used his influence to secure the orphan a place at the Gariland Royal Military Akademy. If the Durai Papers are correct about Ramza's age, it would not be unreasonable to assume that he attended the same institution.

Jenomis cen Lexentale: The pair would not walk the same path for long, however. Following the untimely death of Tietra -- the culmination of a tragic sequence of events set in motion by none other than Ramza himself -- Delita cut ties with the house to which he had been bound since birth, and pursued his ambitions alone.

Who were the Zodiac Braves?

Jenomis cen Lexentale: Though they are virtually synonymous with Ivalice, little is actually known of the Braves and their origins. Legend has it that Delita, acting at the behest of the Church of Glabados, set out with a company of knights to recover the twelve lost Zodiac Stones. This they duly did, earning themselves the moniker of Zodiac Braves.

Jenomis cen Lexentale: As you might expect, however, the Durai Papers tell a different story. Orran claims that it was not Delita who led the knights, but Ramza Beoulve.

Jenomis cen Lexentale: How this discrepancy arose is yet a mystery, but one I fully intend to solve.

Jenomis cen Lexentale: Legend paints them as holy relics created by the very gods of Ivalice themselves. Instinct and better judgment suggest they are similar to the aether-based crystals of the present day... but exactly how similar is something I will require more time to establish.

Jenomis cen Lexentale: One thing both legend and the Durai Papers agree upon is that auracite had the power to make manifest one's deepest desires -- be they fair or foul.

Jenomis cen Lexentale: This is borne out by the fact that the stones are credited both with destroying Mullonde, city of the gods, and granting Delita the power to bring order to chaos in his kingdom. Auracite, I conclude, is precisely as good or evil as its wielder.

Who... or what are the Lucavi?

Jenomis cen Lexentale: Ivalician legend portrays them simply as demons, but I have a theory as to their true nature based on my own observations... and, of course, those of my honored forebear.

Jenomis cen Lexentale: The Durai Papers tell us that when an auracite is used with malign intent, it warps both body and mind, transforming the wielder at last into... something no longer of this world.

Jenomis cen Lexentale: These beings... These “others” are, I believe, one and the same as the twisted creatures you faced in Rabanastre.

Jenomis cen Lexentale: Defeating said monstrosities served to restore the auracite to its original crystalline state -- that of the Duma -- which, again, is consistent with events described in my ancestor's records.

Jenomis cen Lexentale: According to legend, Argath Thadalfus -- or Algus Sadalfus, depending on which version of the tale your nursemaid told you -- was once heir to a high house which had fallen into disrepute through the ignoble conduct of its then lord, Argath's grandsire.

Jenomis cen Lexentale: Cursing his family's diminished circumstances, the youth turned his ire upon the only souls over whom he still retained any influence: the smallfolk. But Delita, hero of the common man, would not suffer this, and after trying and failing to reason with Argath, put him to the sword.

Jenomis cen Lexentale: The Durai Papers, however, tell us more. They make mention of an heirloom passed down from generation to generation in House Thadalfus: a priceless jewel known as the Duma.

Jenomis cen Lexentale: Upon Argath's death at the hands of Delita, the power of the Duma -- which the young Thadalfus carried upon his person -- was unlocked, and the Lucavi bound to it released. The stone duly gave form to Argath's fury, reanimating his body, and granting him the strength to exact revenge upon the one who ended his life.

Jenomis cen Lexentale: Yet who should spare Delita that fate but Ramza, who battled the vengeful corpse unbeknownst to his childhood friend, and finally brought peace to Argath's soul... though we know better.

Jenomis cen Lexentale: Now you may ask why Ramza would lend his blade to the selfsame man who forsook his ties to House Beoulve. The reason lies in poor Ramza's own involvement in the murder of Delita's sister. It was Argath who fired the bolt that struck Tietra down, aye... but it was Ramza's earlier rescue of Argath that paved the way for the tragedy to follow.

Jenomis cen Lexentale: Though Argath was dead, and Tietra avenged, Delita's bitterness endured and festered, and it was not long before he began to blame Ramza. Ramza, for his part, understood all too well the turmoil in his grieving friend's heart, and therefore chose, out of respect, to maintain his distance.

Jenomis cen Lexentale: So, the question before us remains how and why a man twice consigned to the grave could rise again to wreak chaos... and in Rabanastre of all places.

Jenomis cen Lexentale: Did unscattered remnants of Argath's undying rage trigger a second reaction in the Duma, calling the Lucavi once more to our realm? Or was it something else? Something more... sinister?


Do Not Sell My Personal Information
Retrieved from "https://ffxiv.consolegameswiki.com/mediawiki/index.php?title=Jenomis_cen_Lexentale&oldid=153560"
Categories: