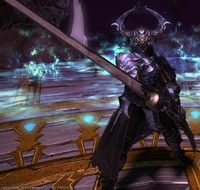 The eldest son of the influential Hydrus family, Regula is a pure-blooded Garlean who has been fast friends with Varis zos Galvus since both were but boys playing in the imperial palace. He is known to be a man of honor, and his support for Varis in the war of succession never once wavered, no matter how bleak matters became. Regula also aided in his friend's candidacy by attacking the encampments of rival factions.By all reports, Varis trusts Regula implicitly. That the Emperor gave him command of the Gration and asked him to find the mythical floating isle of Azys Lla bespeaks as much. The legatus of the VIth, in turn, is a staunche believer in the necessity of exterminating the eikons.Regula has had two great loves over his forty-four summers—music, and ancient Garlean techniques of the sword. Few more ardently support the art, and fewer still are more practiced. The Bastard: A large gunblade created at the Magitek Academy, this arm was given to Regula in part to see how it performed in battle. Though fondness causes many men to give fanciful names to their weapon, Regula prefers to simply call his arm what it is: a bastard sword with a firearm attached.

Regula van Hydrus is a boss found in The Aetherochemical Research Facility.