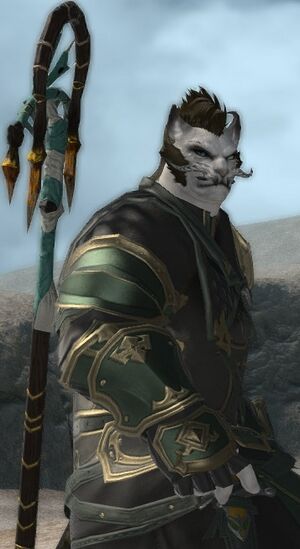 Bajsaljen Ulgasch, the leader of the Bozjan Resistance and Gunnhildr's Blades

The Bozjan Resistance is a resistance movement made up of the remnants of the people of Bozja who survived the Bozja Incident. This group of people fight for the freedom of Bozja after hearing of the success of the liberation of Doma and Ala Mhigo.

Following the destruction of Bozja during Project Meteor, several resistance groups rose up in an attempt to rid the land of Garlean control. However, with their land destroyed and resources low, these groups were quickly put down. However, following the liberation of Doma and Ala Mhigo, the Resistance found new strength and rebuilt their forces with the help of Hien. With the backing of the Eorzean Alliance, they have been furnished with provisions and weapons to give them the means to take back their homeland.

Following the advice of Misija Votyasch, the Resistance sought to remake the weapons used by Gunnhildr and her royal guards during the founding of Bozja. Bringing Gerolt Blackthorn into the fray to forge the weapons, as well as Mikoto Jinba, they attempted to learn of the inscriptions used to empower their weapons.

Unable to make much headway, the Warrior of Light was brought in, due to their power of the Echo and their ability to walk in memories. After using a relic called a Crystal Focus and walking through the memories of Cid nan Garlond, they obtained the inscriptions and were able to set Gerolt to work on forging the weapons. With them in hand, the people of Bozja rallied behind the Resistance, who took the name Gunnhildr's Blades in honor of the guard of their founder. In high spirits, the Resistance head to the Bozjan Southern Front to take back Castrum Lacus Litore.

At the Southern Front, the Warrior of Light assists the Blades in various battles while also scouting various areas to gather data to locate Aetherial surges to recharge the Crystal Focus in order to help heal soldiers of their trauma from the battlefield. However, Misija wanted to use the Crystal Focus for her own reasons, and reveals herself to be a double agent working for the Empire. Capturing Mikoto and taking the Crystal Focus, she flees.

Mounting a full-scale rescue mission, the Blades corner Misija. However, using the power of the Crystal Focus, she contorts the memories of Queen Gunnhildr within the blade Save the Queen to be a twisted version of the truth, and awoke the Queen as a sort of Primal, using her powers to bring a majority of the Blades under her control, while the rest manage to escape.

Having suffered a terrible defeat, the Blades regroup back at their camp, only to learn that the apparition of Queen Gunnhildr has been seen around the battlefield. Mikoto and the Warrior of Light take to the field and find Misija and spy on her. They learn that she has all but extinguished the power of Save the Queen and is currently looking for certain ruins to recharge the weapon with crystals in a method similar to charging the Crystal Focus. The blades make ready for battle and head to the ruins of the Delubrum Reginae.

Chasing Misija and the blades into the heart of the ruins, past the twisted forms of those who were once members of the Blades of Gunnhildr, the Blades find Misija and a massive crystal, which she uses to reawaken the power of Save the Queen, and take the power into herself. Through a brutal battle, Misija is defeated and the Save the Queen is recovered. With Misija captured and placed in custody, the Blades join with allies from the Far East to make a stand against the Empire.

Learning that the Empire has completely retreated from the Castrum, the Blades advance onwards towards their last stronghold on Bozja, in Zadnor. The Empire bombards their camp from the skies with their airships, however, thanks to Cid, they have a barrier erected that can withstand the attacks of the Empire.

Slowly but surely, the Blades and the Warrior of Light make their way across Zadnor, reclaiming several outposts and bases, until they come up against the Dalriada, one of the Imperial's strongest warships. Cid and the Blades collaborate to create a device to disable the warship and attack the Imperials at the base of their operations.

TheD.A.M' works perfectly, and the Blades are able to infiltrate the Dalriada, and thwart the remaining Imperial forces, as well as the Allagan Weapon they had brought to eradicate the Blades. However, at the last minute, the Diablo Armament began to malfunction, and tore through the ceiling of the ship, preparing to fire an attack that would completely destroy Bozja, and as a result, the Blades. However, at the last moment, Queen Gunnhildr, Save the Queen in hand, appeared. With one swing, she destroys the Diablo Armament. However, the resulting explosion claims the queen and her blade. Finally, the people of Bozja had shaken off their conquerors, and were free.

With the Empire removed from the land, and being pushed out of other areas as well, the people of Bozja, with Bajsaljen as their leader and the Blades of Gunnhildr as a military of sorts, were able to slowly begin to rebuild their home.