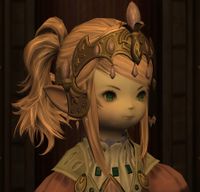 "The true wealth of Ul'dah lies in the health, happiness, and hopes of her citizens."

A Dunesfolk maid of royal blood, Nanamo Ul Namo came to power at the tender age of five when her father passed. Naturally, none so young could fathom the intricacies of government, and the sultana was relegated to the role of royal puppet. Despite having ruled for more than a decade and a half, to this day, many dare to accuse her of being little more than a mammet mouthing the Syndicate's words.She is not, however, without her allies. At the age of nine, she surprised the city-state by pardoning Raubahn Aldynn on a whim. As his Coliseum winnings were conferred upon him, the Bull of Ala Mhigo swore an undying oath to serve as the sultana's sword. When he joined the Syndicate, Raubahn made good on this promise, and remains entirely loyal to Nanamo.Though she is the picture of propriety when sitting the throne, Nanamo is still a maiden of twenty-one years, and has a more playful side. She is known to leave the palace incognito, and take tea and crumpets at the Quicksand.

Nanamo Ul Namo is a Lalafell found in Ul'dah - Steps of Thal.

Following the destruction of Eorzea at the hands of Bahamut, she worked tirelessly to restore order to the city of Ul'dah, employing the members of the Thaumaturge's Guild to aid her. For their deeds and assistance, she named each of them a Guildmaster. Many years later on the anniversary of the Seventh Umbral Calamity, she gave a speech to rouse the people of Ul'dah and raise their spirits. When Gaius van Baelsar declared his intentions to attack Eorzea, Nanamo was amongst the leaders who ultimately decided to make a stand and aided in forming Operation Archon, helmed by her right hand, Raubahn.

While outside of the city walls dressed as a commoner and under the name "Lilira", she escaped the ever watchful eye of Thancred, and was ambushed by a voidsent summoned by an Ascian. She was rescued by Thancred and the Warrior of Light, whom she revealed her true identity to, and said she was ever in their debt for their courage and bravery.

When Yugiri Mistwalker and the Doman Refugees came before her to ask for sanctuary, Nanamo empathized with her and her peoples' plight. However, she was ruled against by The Syndicate, and was ultimately powerless to do anything. When Teledji Adeledji proceeded to incite riots in the streets, she learned it was an attempt to force her hand into signing the Carteneau Reclamation Bill, which would see ownership of the land turned over to Ul'dah-and ultimately, the Syndicate, which would give him access to the Allagan weapon Omega. This caused Nanamo to become wary of the machinations of the Syndicate, and intended to dissolve them.

Before she could take action against them however, Teledji attempted to have her poisoned, and the Scions of the Seventh Dawn and the Warrior of Light framed for regicide. However, her life was saved when Lolorito secretly had the poison swapped with a powerful sleeping draught.

Some time later, Nanamo was awakened by an overjoyed Raubahn, who administered the antidote himself. Thankful for him, the Warrior of Light and the Scions, she returned to active duty leading Ul'dah. She also had the Immortal Flames participate in the Grand Melee as a show of support for Ishgard rejoining the Eorzean Alliance.

Following the liberation of Ala Mhigo, Nanamo released Raubahn from his services so he may return to his homeland and aid in its rebuilding. She also sought to help them herself, and ended up consulting with Lolorito on how best to do this. They agree that they should fund the rebuilding of the saltery, and the pair both offer up a sizable fund to do so.

Nanamo was also present at the parley between Eorzea and the Garlean Empire. She, along with the other leaders attempted to sway the Emperor to cease his conquest and join with Eorzea instead, uniting the Three Great Continents. He instead refused, swearing to take the realm by force. Realizing there was no further point in peace talks, both groups prepared for war. For her part, Nanamo had the Immortal Flames join the other nations on the battlefield of The Ghimlyt Dark to hold back the forces of the Empire from invading.

Some time later, when the Final Days had befallen the world, Nanamo sent several envoys to deliver goods and materials to enhance the Ragnarok as well as supply the refugees who sought to go to the moon. When the Final Days had been averted, she along with the other nations held a celebration in honor of the Scions and the Warrior of Light.