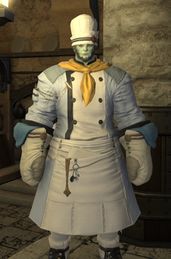 "Our trade's as tough as old mutton, an' passion's the only thing what gets us through the gristly bits."

Head chef of the Bismarck and master of the Culinarians' Guild, Lyngsath Hyllbornsyn learned his trade aboard a merchant vessel that ventured far and wide across the five seas. As such, the Sea Wolf is well versed in foreign techniques and ingredients, and behind his every dish are his forty-two summers' worth of experience in the kitchens. Unbound by conventional thinking and recipes, he is famous for borrowing from multiple traditions to create new culinary wonders.

Lyngsath is a Roegadyn found in Limsa Lominsa Upper Decks.

Lyngsath works with the various members of the Culinarian's Guild, teaching them the basic techniques of cooking, and aiding them in honing their skills. He worked with the Warrior of Light, helping them cook various meals for their fellow guildmates. He also aided in preparing the Warrior of Light to make a dish for the Sultana as part of the plan of Lolorito, a powerful member of The Syndicate who intended to close the restaurant down and humiliate the Warrior of Light. After the amazing banquet delivered by them, Lyngsath thanked them for doing right by him and the guild.