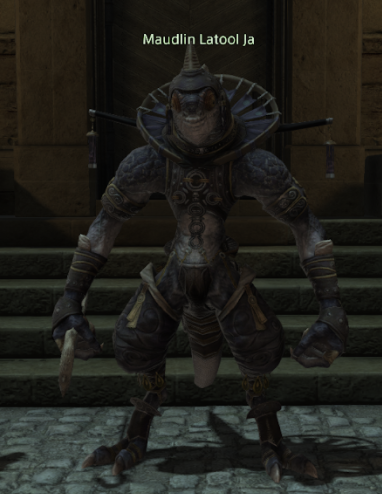 Hailing from The New World to the far west, the Mamool Ja are most commonly spotted selling their mercenary services on the isle of Vylbrand. They are but recently arrived on Eorzea's shores, and much about these scaly beastmen remains the subject of rumor and hearsay.

The nation of Mamool Ja is comprised of a number of distinctly related tribes, each of which exhibit distinct physical characteristics. The Hoobigo are marked by light-brown scales and a longer comb than their kin, and their rute strength often places them in the ranks of melee infantry. In contrast, the large-eyed Boonewa are born with deep reservoirs of aether, and these natural spellcasters are soon identified by the blue-green tinge of their scales. Lastly, there are the mottled Doppro, whose bloodline produces skilled beast handlers and cavalry riders.

As omnivores, Mamool Ja eat a rich and varied diet. Finely ground cornmeal is a staple of their larder, and this is kneaded and baked before being used to wrap all manner of seasonal fillings.

Arising in the New World to the west (a land also known as Mamook), Mamool Ja is the name given to both the nation and its people. Ketenramm the Blue, an intrepid adventurer and explorer, returned from the beastmen's city-state with tales of their two-headed king-the Autarch-whose rule binds the disparate tribes into a singular society.

Though not expressly forbidden, the diverse people of the Mamool Ja seldom marry outside their own tribes. This unspoken rule is broken, however, when members of different tribes are wed during the observance of certain religious ceremonies. Such unions occasionally result in two-headed offspring, and these "blessed siblings" are groomed for leadership from the moment they are born.

Upon reaching maturity, two-headed Mamool Ja take command of a number of their single-headed kin and head out to form their own warbands. These warbands endlessly seek to outdo one another on the field of battle, in a contest over who will next sit the throne of the Autarch. Rather than simply as a means to earn wealth, Mamool Ja practice of hiring themselves out as mercenaries also appears to play an important role in this display of military prowess.

The warriors of the Mamool Ja have built a reputation as blades-for-hire, and have several well-established mercenary bands. Drawn by the scent of conflicts that flared following the Calamity, the beastmen crossed the sea to Eorzea to ply their opportunistic trade-a service of which the Kobolds have taken full advantage.