The Character creation tool is also available for free in the latest Final Fantasy XIV benchmark. Users can pre-create as many characters as they'd like and save presets for later import. These presets can be used during the actual in-game Character creation or for making Retainers. This is especially useful for trying to get into crowded servers at off-peak hours as it greatly speeds up the process.

This section will go on to explain how to create your character. 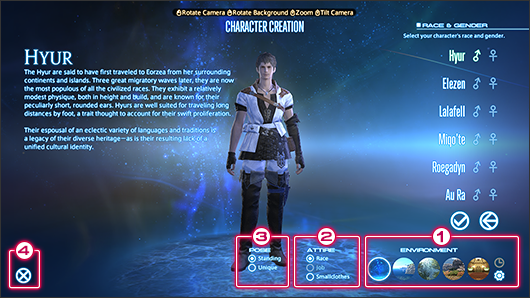 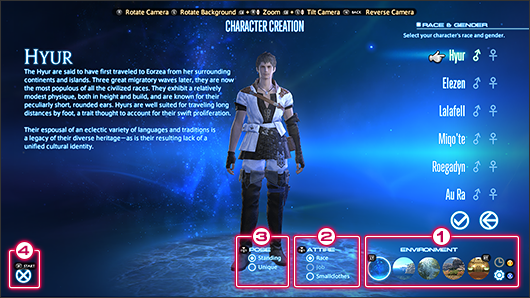 4. Return to the character selection screen. Current character progress will be lost.

Players can enjoy the same story and game content regardless of which Data Centre they choose to play on. However, it is not possible to play with players from different Data Centres.

To play together with friends, please make sure to create characters on the same World, or at least the same Data Centre.

Although certain Data Centres are recommended for certain regions of the world, there are no region restrictions, and you may select any Data Centre you choose.

Players on both the Windows and PlayStation® platforms share the same Worlds.

Once you've selected a Home World for your character, you can freely travel to another World with the World Visit System, but certain systems are only available on your Home World. 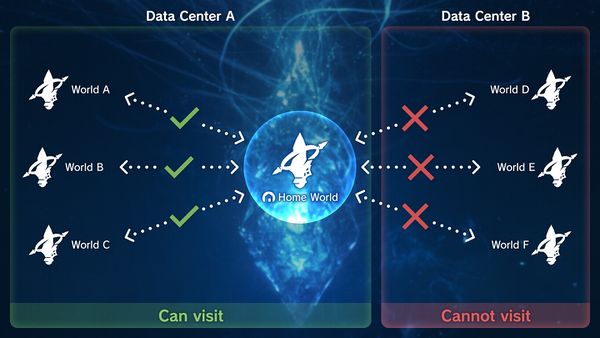 * Players in the same Data Centre but on different Worlds may be matched together when using the duty finder.

To make use of the Home World transfer service, please proceed to the FINAL FANTASY XIV: Mog Station.

Players can save the appearance of their characters and reuse them when creating additional characters.

* Please refer to the most recent patch notes for up-to-date information.

Final Fantasy XIV is just like any other MMO in existence, before you get started into the fantasy-filled world of an MMO, you've got to make yourself a character. Whether that character is the spitting image of your or they look as close to a humanoid-bird creature as you can get them, you're going to need that character one way or the other.

To start things off, let's go with the one thing that is essentially going to define your character: their class. There are a number of different classes from you to choose and depending on how you would like to play that character then there are a couple of different roles that coincide with each class, so keep that in mind when you're finding a class for your brand new character.

These classes are as follows; along with their perspective role:

There's a lot to choose from in terms of classes, but they're all relatively simple to get the hang of once you make a start on them. Again, if you're someone who's ever played an MMORPG before then you know what to expect with each class and their role.

You've got the DPS who are designed to deal as much damage as possible; the healer who is expected to heal and keep people alive during the fight; then we've got the tank who is designed to take a real beating, sustain all the damage, and keep any enemies focused on them so the rest of the team can do their thing without any trouble getting in the way. Simple enough!

After you pick your class, you're going to want to pick a race for that character and they are as follows:

Each race does have some very small passive differences to one another; such differences that can make a minor impact on your character towards the end of the game. Ultimately, though, what race you pick isn't particularly important, so feel free to pick the race that you find most aesthetically pleasing – certainly when you realize that you're going to be stuck with them for the remainder of your time inside the game. (

Fantasia does exist, though only 1 is free)

Do be aware – depending on the class that you choose and not the race, that decides where your characters starting city is going to be.

Look below to see where you will spawn in the world, due to your chosen class:

Alongside all of this, you can also choose from a variety of gods that have no stat effect at all as of patch 4.2. Make a lore-based decision based on whatever sound cool or your head-canon / role-play for your character.

That pretty much wraps up all of your major decisions when it comes to choosing how you want to create your character, with the exception of how you wish for them to look. Basically, let's put it this way; if you can think about an inch of your character you want to edit then you probably can! Regardless of how you'd like to see your new character, there's plenty to change in the form of hairstyles, eye colour, positioning of their nose; pretty much the works!

So, feel free to delve into the character creator and enjoy just how deep and detailed it can be; providing you wish to spend so much time on perfecting your character. If you don't really care, simply keep hitting random until you're happy to some degree and make your start on the big-bad world of Final Fantasy XIV.