Legend states that any who drink this mysterious liquid before lying down for the evening will awaken a new man (or woman).
Grants you a single opportunity to edit your appearance in the character creation screen upon your next login. 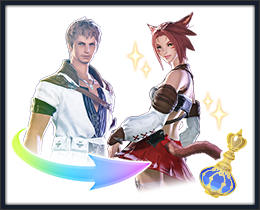 A Fantasia is a potion item that, after consumption, grants the player a single opportunity to change the appearance of their character beyond what is available at the Aesthetician. Players will be re-directed to the character creation screen when they next log-in to Final Fantasy XIV, where they can change any aspect of their character (including their race) except the name, starting city, and server. Name changes and home server transfers are available as separate paid services. (World Visit System exists for temporary travel cross-world with restrictions.)

Allows for the re-customization of a player's character after use.

After consuming the Fantasia, go to an inn room in any of the major cities and strip all gear off your character except your main-hand weapon/tool, then log out. Next time you log in you will be given the option to recustomize your character.

※ You do not have to recustomize your character immediately, you can save it for later. Even if you are in the process of recustomizing, if you back out and cancel, the option will not disappear until you finalize your recustomization.